Via Mentana, 8, Forli, Municipality of Forlì, Emilia-Romagna Region, Italy
Back to the list Back to the map
Typology:
n/a
Year of build:
1914
Original name:
Kursaal Centrale
Style:
Eclectic
Architect:
Sesto Baccarini
Past and Present Ownership of the Building/Site:

Following a measure approved by the City Council in 2017, the use of the building has changed. Nevertheless, the regulation provides for a certain protection, which would bind subsequent redevelopment work to 'conservative restoration'. This means that whatever use the Apollo is put to in the future, its structure must be kept intact both internally and externally, even after renovations.

The building is not listed among the buildings supervised by the government department responsible for the environment and historical buildings.

The ceiling, built from Paret material, provides the hall with such wonderful acoustics that, indeed, the famous violinist Franz Veczej was enthusiastic about it, during his first concert in Forlì. Old photographs show that there was a podium in place of the stage, and the audience could access rooms, also known as "barcacce", in the back. Later a real stage was built. The theatre had an elegant, tastefully decorated and spacious atrium. Clearly, the composition of the premises was very different from today's cinemas: the seats, made of wood and with padded seats and backs, had to be movable, in order to make the passage easier in the case of dancing events. The venue was "equipped with all modern comforts", but did not have a stage: instead, a platform was installed, as it was more practical regarding spatial management (the stage can be dated 1921).
During the summer break in June 1921, the platform was replaced by one that is still in use today.
In February 1923 the entrance from Via Cesare Battisti (now Via delle Torri) was planned, as well as other internal changes such as new entrances to the galleries and the location of the ticket office. 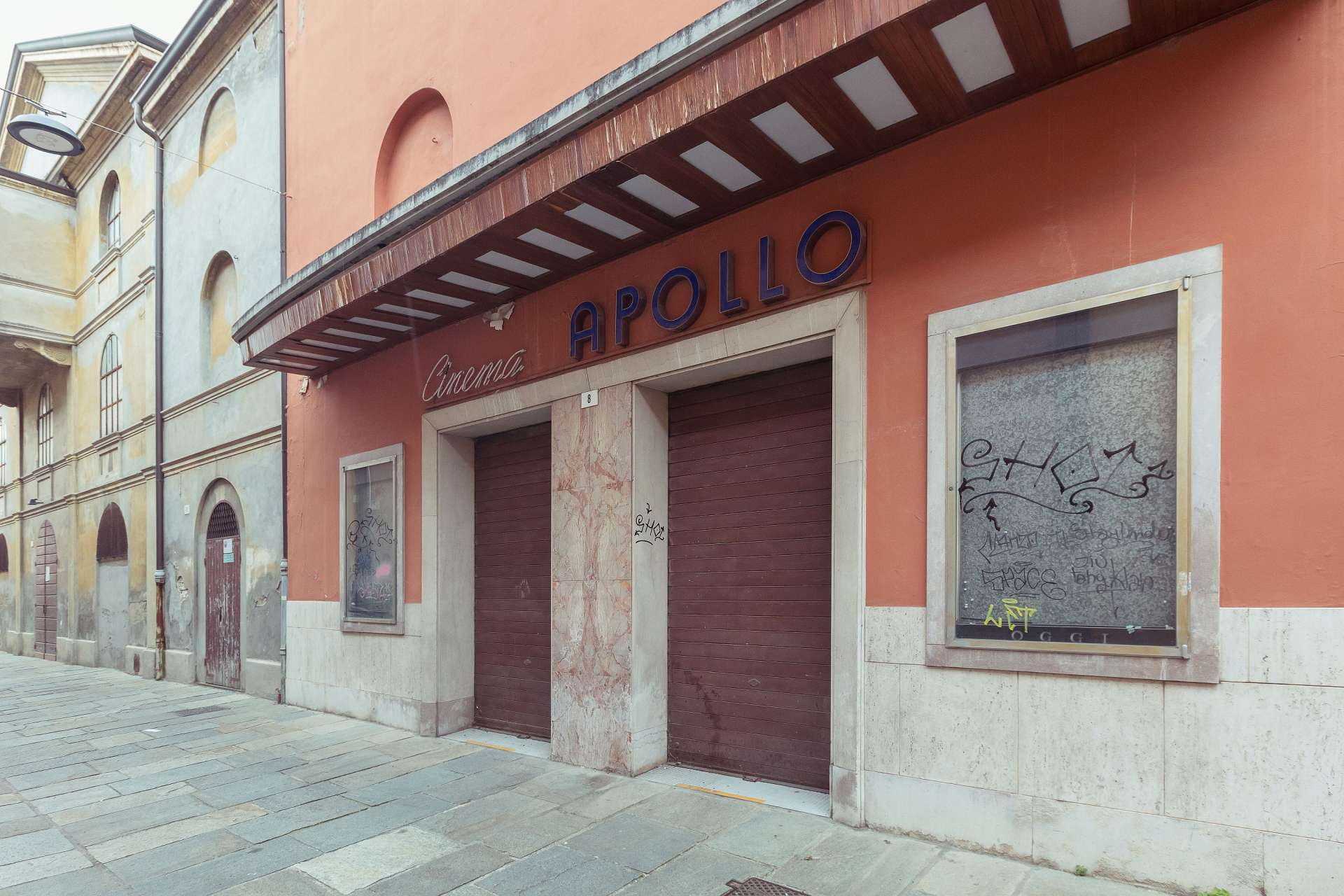 The “Kursaal Centrale” was inaugurated in Forlì on the 24th January 1914. It was a multi-purpose hall intended for 'cinema shows', dance parties and roller-skating.

Following the demolition of the Politeama Ermete Novelli, the project was based on the initiative of Forlì entrepreneur’s Leonida Vallicelli, based on sketches and an executive design by the engineer Sesto Baccarini. Vallicelli’s design had been inspired by previous visits to various theatres in the main cities of Italy and Austria (hence the first name: 'Kursaal Centrale'). The hall was inaugurated with a choir and instrumental concert. In the summer of the same year, the galleries around the hall were extended to provide greater comfort to the audience and to allow dancing events. Shortly afterwards, changes and extensions were made and, due to the difficult historical period, the name was changed to the very Italian "Apollo".

Conceived as a multifunctional hall, the Kursaal/Apollo easily became a point of reference in Forlì's recreational scene. It was a cinema but also a theatre, a dance hall and even a 'roller and ice-skating rink'. With the First World War breaking out and Italy joining the war, festivities were suspended, with the exception of films and concerts. The blatant nationalism of that period and vibrant protests demanded a change in the building’s name, which finally became the “Apollo Theatre”. When a Concert Society was formed in Forlì, Vallicelli agreed to carry out its activities inside the Apollo Theatre, which had the honour of welcoming the greatest concert artists of the era. The hall was requisitioned by the military authorities on the occasion of the retreat of Caporetto and was occupied and used as a warehouse for military clothing for about three months. There were numerous and varied shows: "Un Curato Burlone" by A. Maloss, "L'Esploratore!!!" by G. Giorni, but also the international Greco-Roman wrestling championship.

During the 1920s and 1930s, till the mid ‘40s, variety shows, theatrical, musical performances and, occasionally, dance parties were organized, in addition to film screenings. Just to mention some: the Variety Shows with "Il gruppo Lescano" (The Lescano Group) on 1st June 1942, "I Fratelli De Rege" (De Rege Brothers) on 20 March 1942 and, on 10 April 1946, also a big boxing match. At the end of the war some political party assemblies were held at the Apollo Theatre: on 2nd December 1945, the assembly of Circolo Mazzini; on 9th December Spallicci spoke; on 16th December, the room was given to the Communists Party; on 30th December the assembly of the Socialists Part was held. From August 1944 to 19th June 1945, the hall was closed. During the air raids in 1944, Leonida Vallicelli's house, next to the cinema, was hit by a bomb. Instead of rebuilding his house, in 1947 Leonida Vallicelli took the opportunity to open a second screening room. The Apollo thus became the first multiplex in Forlì and perhaps in Italy.

Leonida Vallicelli was planning to build a theatre next to the Arena Forlivese - in Via Giorgio Regnoli (built in 1918 when some bricklayers, being unemployed after the end of the Great War, asked if he could give them some work to do). The theatre was to be designed by the studio of the roman engineer and architect Piccinato, the most famous theatre designer of the time. It was supposed to be called "Teatro Rex". The building could welcome about 1.900 people; the stage was planned to rotate and have air conditioning. In the end, Vallicelli decided to build a second hall next to the Apollo, which gave the cinema a 'Hall A' and a 'Hall B'.

In the 1950s, the management of the Apollo passed into the hands of Leonida Vallicelli's daughter, Gabriella, and her son-in-law, Decio Lombardi. These were years of great activity, also thanks to a generally changed economic situation and the fact that the cinema maintained a popular profile. At that time, newsreels were projected before the movies, including the “Incom” week. It was Guido Notari's voice to announce the news of the week. It was also a time of important Jazz concerts and theatrical performances which, in addition to movie presentations, continued until the 1960s.

The 1980s took off with another great public success, especially regarding the young generation: “The Party” recorded a new peak of visitors, with an incredible queue of youngsters, pressing to get into the cinema.  In 1983, it was one of the few theatres in Italy to screen the film "Tu mi Turbi" - Roberto Benigni's directorial debut. The night of the premiere, Roberto Benigni himself appeared at the box office to buy a ticket for his own movie. The multifunctional hall hosted wrestling and boxing, as well as rallies and numerous successful concerts. Later on, the second hall gave way to commercial activities.

In 2012, screenings started being discontinued and for some time the cinema was used for one-off and sporadic events. Following its closure, on 30th March 2017, the Apollo cinema lost vocation and stopped being an entertainment venue. 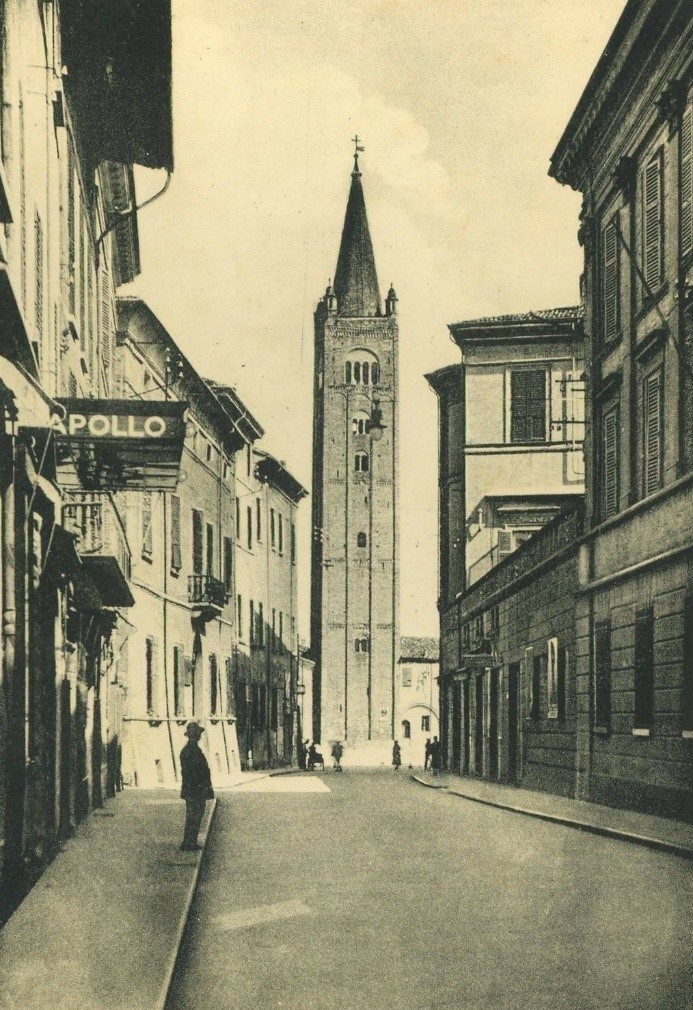 Times’ chronicles tell us that the history of national and international cinema stopped by the Apollo cinema, the first multiplex in Forlì (and - perhaps – of Italy). Not only movies and actors, but also great personalities of the national musical culture have passed through the Apollo which, for many years, has been able to offer a programme of great quality.

During the war, Maestro Archimede Montanelli, a good music lover, used to write reviews for the weekly magazine "Il Pensiero Romagnolo”, particularly focussing on the Apollo. In March 1916, he wrote in resounding tones: "The fourth annual concert, offered to us by the Honour Concert Society in the Apollo hall (...) was a splendid success. The old Italian music, which the very Italian Giuseppe Verdi would like to be studied in all its forms (...) by the young masters, triumphed across the board". In a few lines, Montanelli cited two important facts: first of all, a Concert Society had been founded in Forlì, which formed a solid relationship with the Apollo; secondly, with the continuation of the war, most of the activity had been suspended: only the cinema and the concerts remained. Teresa, who was a film lover, told her grandchildren that Totò too, when he wasn’t famous yet and had "patches on the bottom of his trousers", walked on the stage of the Apollo Theatre as a young man. As reported by “Il Pensiero Romagnolo” on October 29th, 1921: “From Monday, at the Apollo Theatre, the attractions department of the great Almart Circus will be in action with extraordinary performances .... The comedians Totò and Chichì are hilarious...” It is also nice to remember when, during the Festival "Villaggio del Cantante" on December 20th, 1966, Gianni Morandi introduced to the audience a friend who would surely "become famous": it was a very young man in a suit and tie, Lucio Dalla. Also performing at the theatre, a young singer in white socks: Carla Bissi (best known as “Alice”) and Enzo Tortora in his “mimic game”.

In 1963 and from 1966 to 1968, the Apollo hosted the 'Festival della Canzone Studentesca (Students Song Festival), linked to the Catholic organisation Gioventù studentesca (Student Youth), an embryo of the future Communione e Liberazione.

Another important fact for the value of this building is that its history is closely linked to another significant places related to entertainment in the city: the Arena Forlivese. Built in 1918 as the summer arena of Cinema Apollo, it has hosted prose, operetta and entertainment companies. It was the setting for opera performances as well as skating nights, boxing matches, puppet shows and classical and jazz concerts. During the last stages of the Second World War it was used as a base for allied troops and after the war it was enlarged with the construction of a cinema projection booth, thus becoming a reference point for the city's summer entertainment.

The shows and especially the film projections continued uninterruptedly until 1977, when it was closed. Since then it has been used privately by its owners. 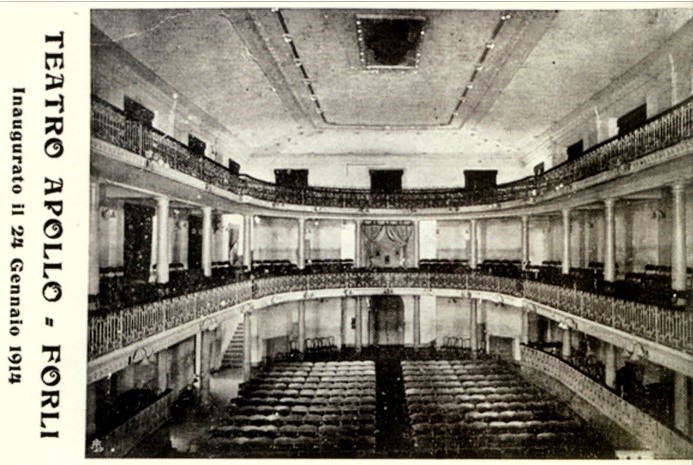 Following the demolition of the Politeama Ermete Novelli, Mr. Leonida Vallicelli devised to build a cinema room for dance parties and triggering, based on his preliminary project and executive design by engineer Sesto Baccarini after visiting several theaters in the main cities Italy, and Vallicelli himself wanted to be inspired by some Austrian theaters, hence the first name "Kursaal Centrale". Conceived as a multipurpose room, the Kursaal became a point of reference in the recreational environment of Forlì. Located in via Mentana, immediately after the vault that connects with via delle Torri, in the heart of the city center, it is one of the historical places of the city aggregation.

In the 1950s, with the growth of well-being and the desire for entertainment, the cinema doubled, with the opening of Room B, which was then demolished in the early 2000s to create commercial spaces on Via delle Torri. In the mid-90s the Municipality of Forlì stepped forward to buy it, but the operation did not go through. So in 2012 the suspension of the screenings.

Taking advantage of the process underway to update the building regulations, in 2017 the owners asked for the removal of the restriction on the building's exclusive use as a cinema and theatre. This request was accepted by the municipal administration and endorsed by a majority vote in the municipal council. During the commission meeting, it was explained that although the building is over seventy years old (it would soon be one hundred years old), being private, there was no restriction on its use, while there is no architectural restriction by the Superintendence. 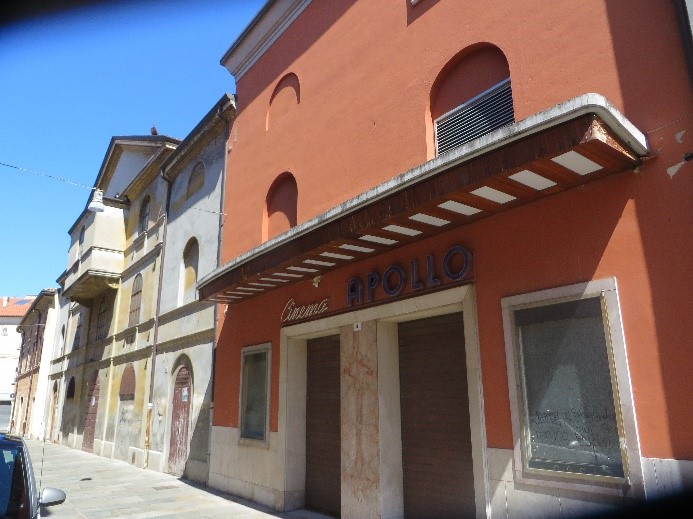 Request to open an access compartment between the Apollo cinema theater and the residence of the owner, Leonida Vallicelli, located in via Cesare Battisti 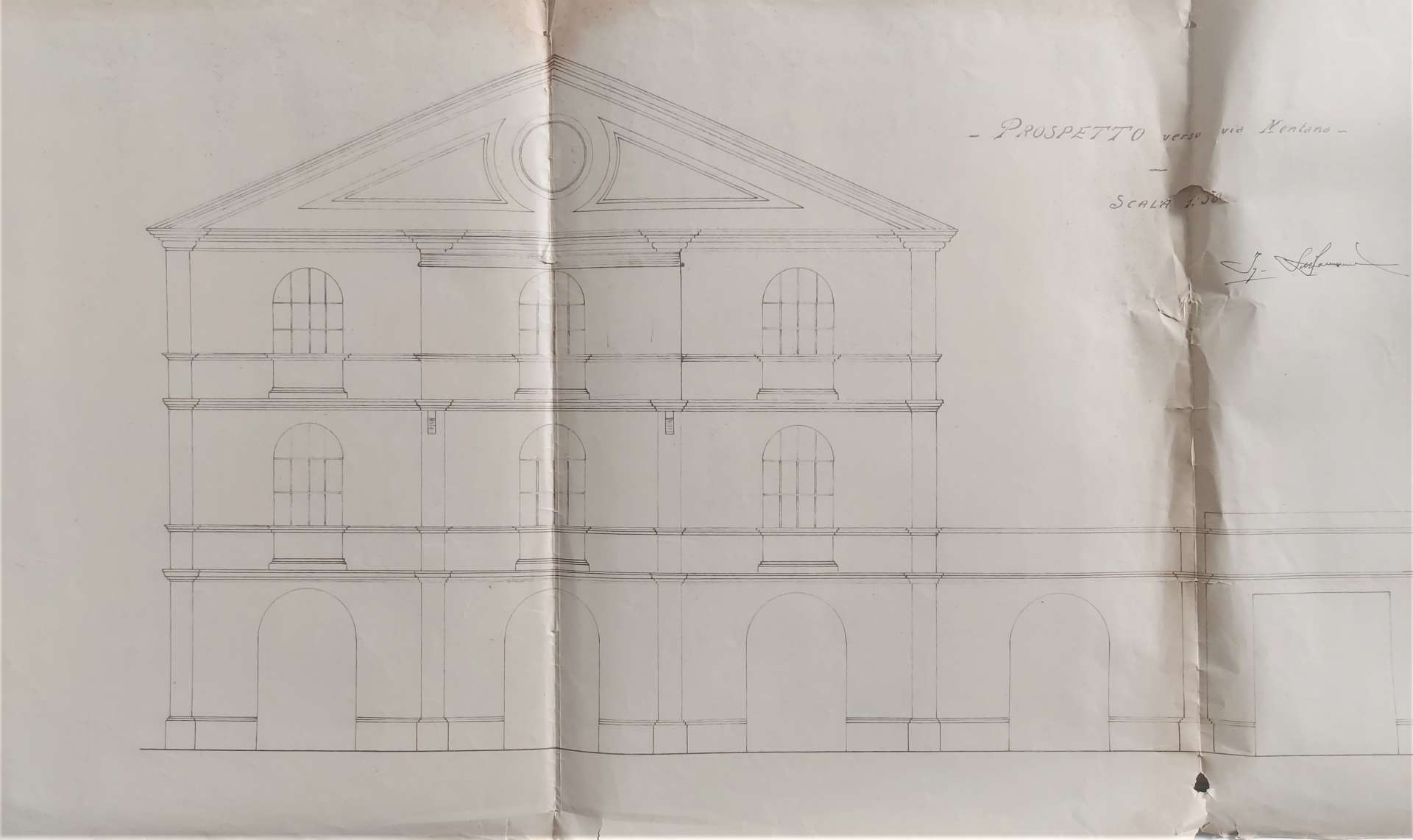 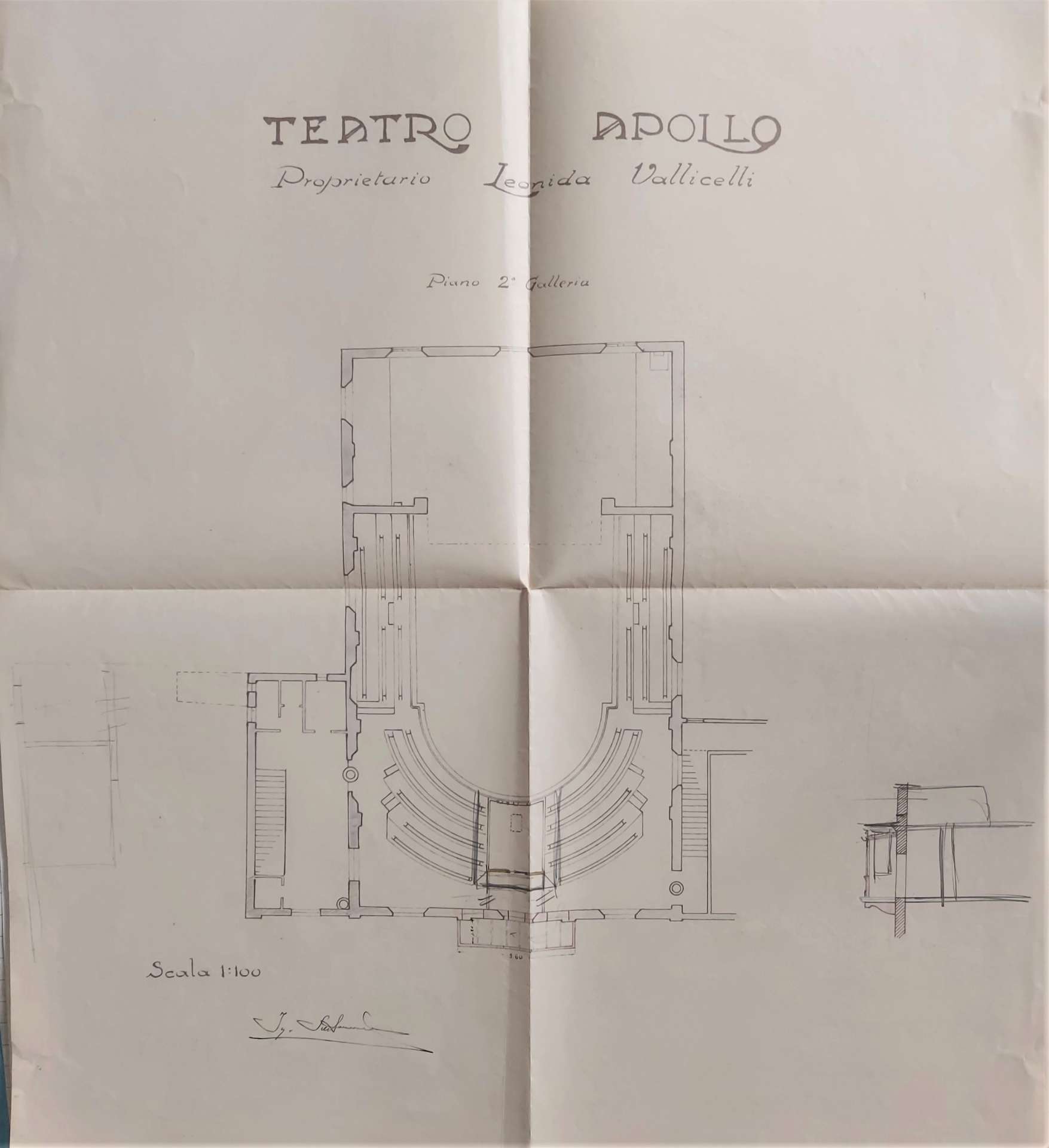 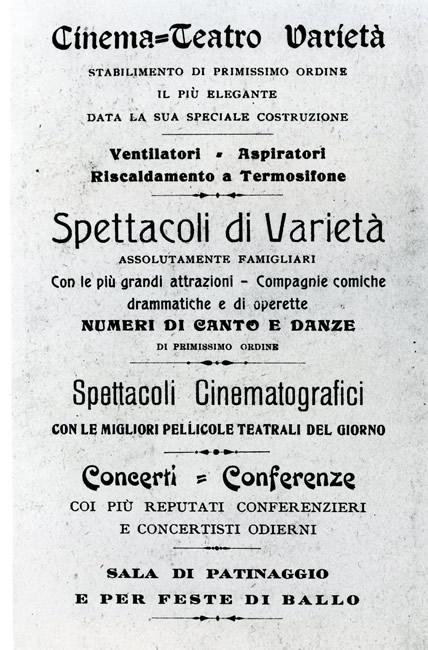 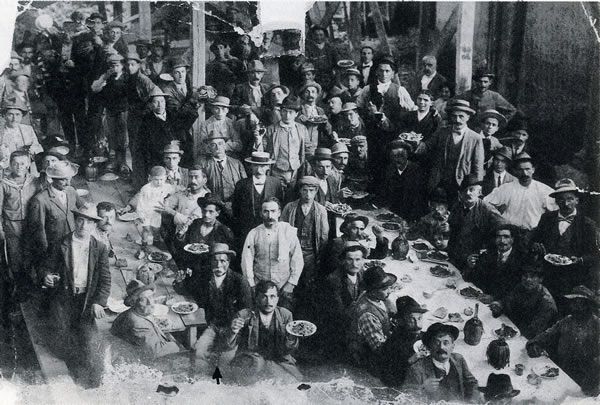