A hill above the Rječina River canyon, Rijeka, Primorje-Gorski Kotar County, Croatia
Back to the list Back to the map
Typology:
Fortification
Year of build:
1931-1941
Original name:
Monte Lesco
Style:
Military architecture
Architect:
n/a
Past and Present Ownership of the Building/Site:

“…It lacked, however, weapons and various elements of communications and electrical equipment, and could not be considered operationally ready. Unlike the aforementioned fortifications, whose bunkers were buried deep into the slopes of the hill, the fighting blocks on the Monte Lesco elevation were massive concrete structures above ground, while the project according to which the fortification was to be built, envisaged multiple embrasures per block with the use of both frontal and lateral fire. The bunkers were appropriately camouflaged, so that they resembled clusters of karst rocks, but an experienced observer from far away would be able to recognise their purpose thanks to the highlighted size.”

Fairly well preserved. The passageway of the entrance crew room is backfilled with building material, i.e. brick that has collapsed from both the walls and ceiling, leaving the concrete part visible. It is not a listed building. 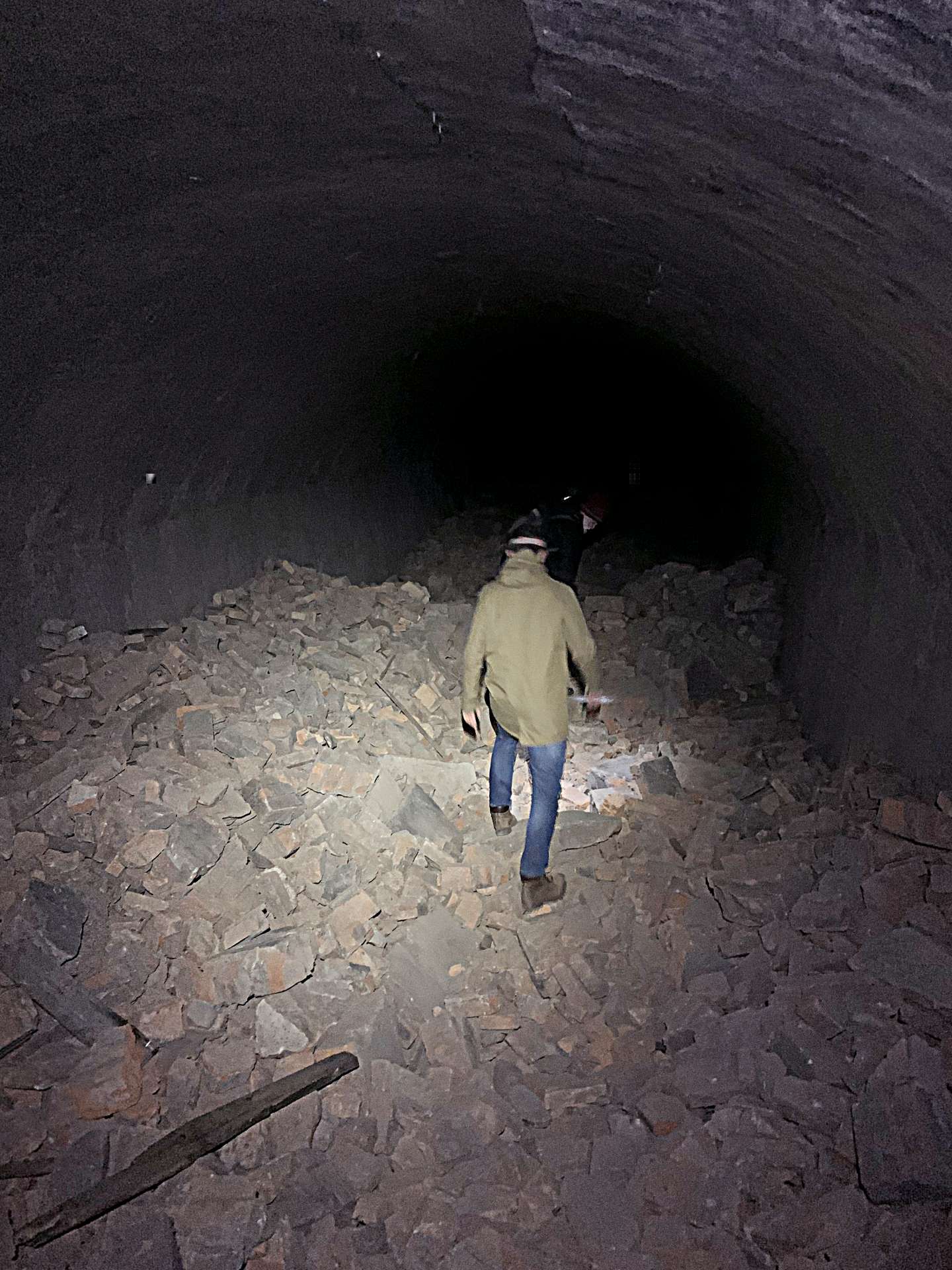 The construction part of the underground building is completely finished, with already obvious signs of degradation, right at the entrance where the wall and brick ceiling inside the crew room have collapsed. The main tunnel is about 130m long, while the total length of the underground parts being about 470 metres.

“The underground (logistical) part is located at a depth of about 14 metres below the level of the main observatory, with all the necessary parts located in the extension of the main corridor, which extended in a northwest-southeast direction. The excavation was reinforced with concrete and then further coated with bricks. The room for the electricity generator, kitchen, toilets, and food and water storage is located close to the only entrance (lack of the usual emergency exit is an atypical feature of this fortification).”

What also differentiates this from the other fortifications is the spiral staircase (86 steps) that leads to the most representative aboveground bunker, at the very top, right next to the hiking promenade, and overcomes a leveling of about 14m.

“The "most attractive" structure of this fortification is a massive concrete observatory with three unshielded embrasures oriented west, north and east, with a separate dome (casemate) with one embrasure for machine gun, facing northwest.”

Masterfully camouflaged in a way that resembles a build-up of karst rocks, this bunker was, from far, recognisable for its size, and even today, anyone who passes by is sure to notice it because it impresses with its massiveness. Unlike Katarina A and B, whose bunkers were buried deep in the hill slopes, the construction of concrete bunkers at Veli vrh also explains the current state of steel shortage in Italy, which suffered an international embargo on steel imports, and the Navy had priority for its use. The lack of steel armour in the embrasures has obviously been attempted to compensate, with a greater thickness of the protective layer of concrete, resulting in the larger dimensions of the bunker.

“…the fort had a total of nine combat blocks with 13 heavy machine guns and light machine guns,…” 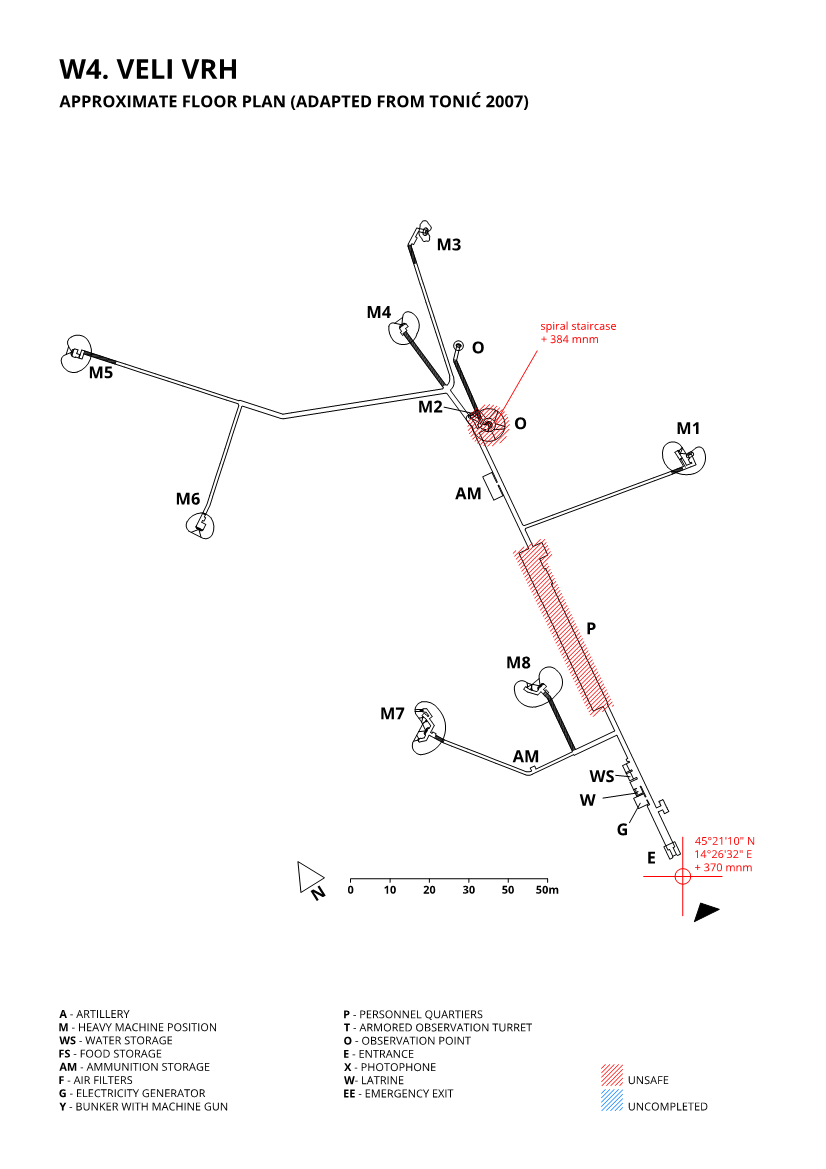 As consolidated by the Treaty of Rapallo in 1920., a border was passing through the City of Rijeka dividing the city in two parts. The western part that included Rijeka with its harbour was under the Kingdom of Italy, while the eastern part including Sušak and the river Rječina was assigned to the Kingdom of Serbs Croats and Slovenes (treaty of Rome 1924.). The part of the frontier that was passing over the hills above Rječina river was heavily fortified by some of the main defensive corps of the so-called line “Vallo Alpino” (Alpine Wall). 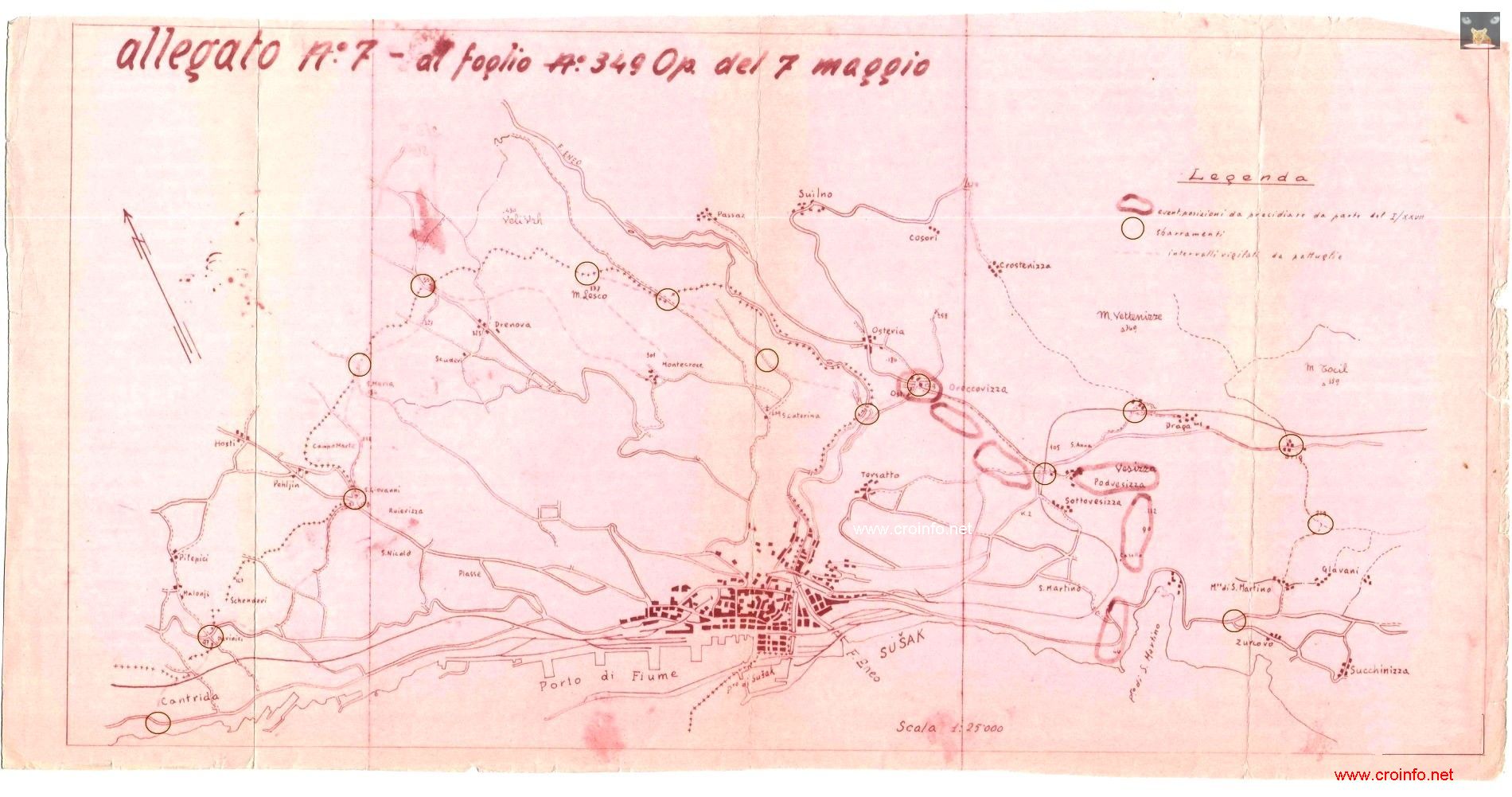 The value of this site is primarily both cultural and historical, both globally and locally. However, the architectural value of the fortification, especially the skillfully camouflaged above-ground bunkers, should also not be underestimated. More recently, this site has become the city's hub for sport climbing and various other outdoor activities, and the concrete bunkers have become a base for graffiti. 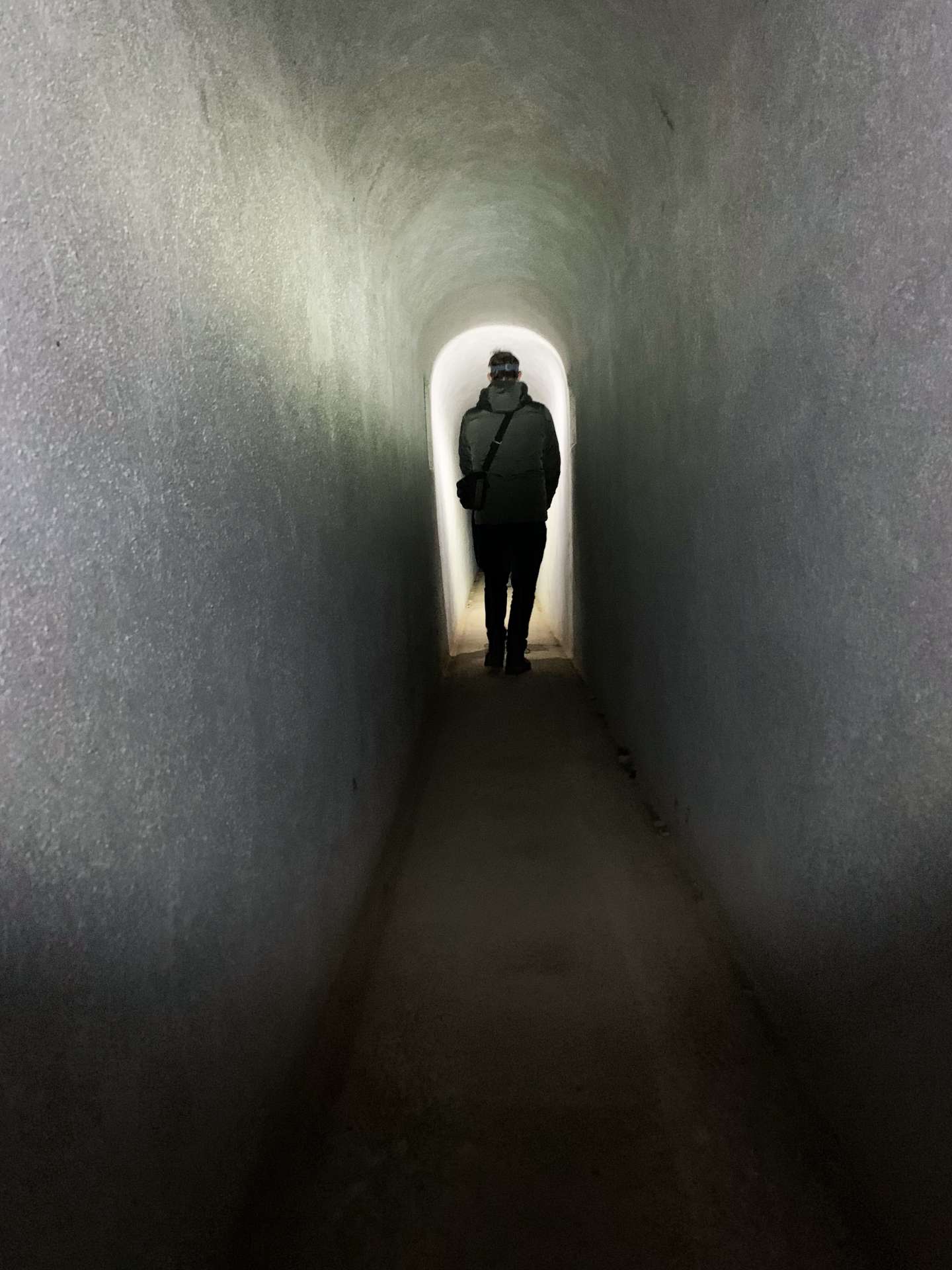 On the slopes of the hill above Pulac, there is a paved but narrow and winding road which leads to Veli Vrh. This place has been a popular city climbing destination for many years. Furthermore, the "Rijeka promenade" mountain path leads here as well. The view is breathtaking, both west towards the sea and east towards the hills. A great place for meditation, sport and recreation. 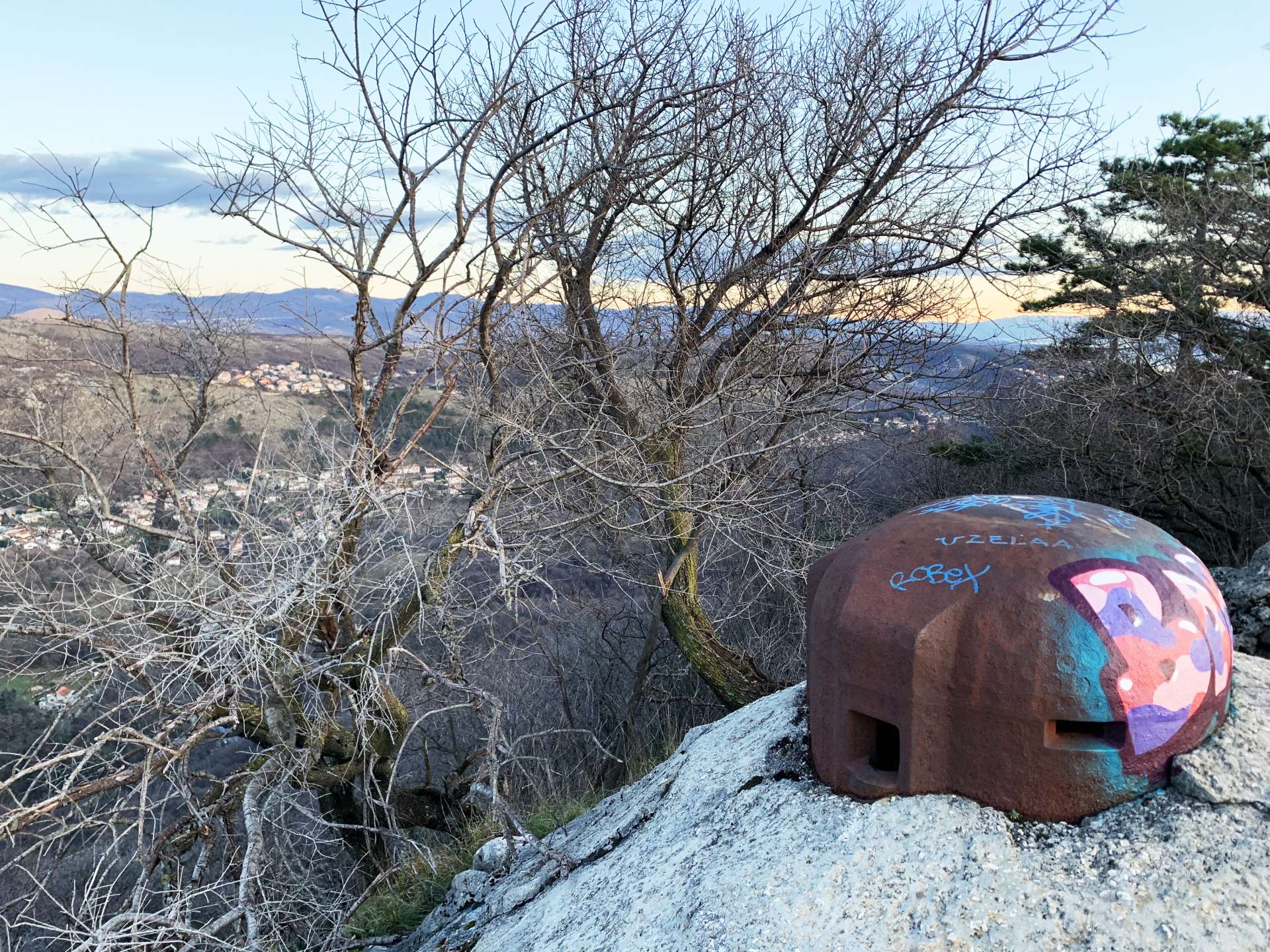 Given the urban context in which the fortification is located, and the type of bunkers that are different from the others in the surrounding area, including a number of smaller abandoned buildings, this would be an ideal place to form a smaller sports and recreation centre run by one of Rijeka’s numerous mountain societies, intended primarily for locals and then for tourism. It is rarity to have such a hiking destination near the city. It is interesting that in the 1980's, ideas about the establishment of a Museum of the Battle of Rijeka existed, which allegedly came to the administrative center in Belgrade although the idea never came into fruition.

At this location, more attention should be paid to the environment and above ground battle positions that can fit into the sports and recreation story, rather than to the tunnel itself, which by no means is different when compared to the adjacent tunnels on Sv. Katarina. Moreover, the subjective impression is that the underground premises of Veli Vrh are much cooler with sensory wind passing through. 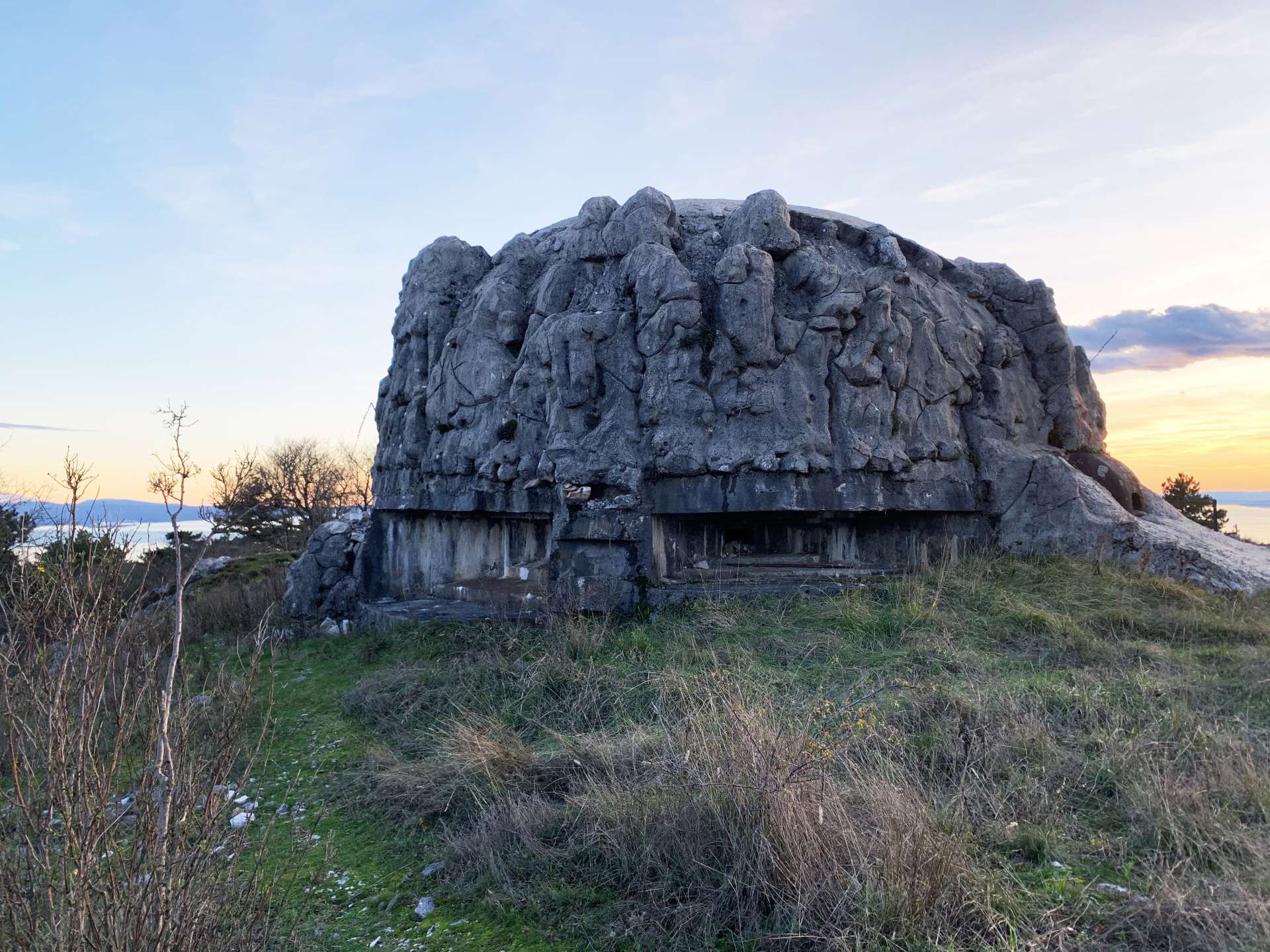 The archival documentation for the construction of tunnels and bunkers was not found in the State Archives, which is logical given the fact that the construction of these facilities was a very well-kept secret at the time. It is not possible to exclude the possibility of archival documentation on the Rijeka fortifications in the military archive in Rome, however, although for this it would be necessary to have a longer period of time for research. The found documentation comes from private sources or Drenova Heritage Museum digital archive. 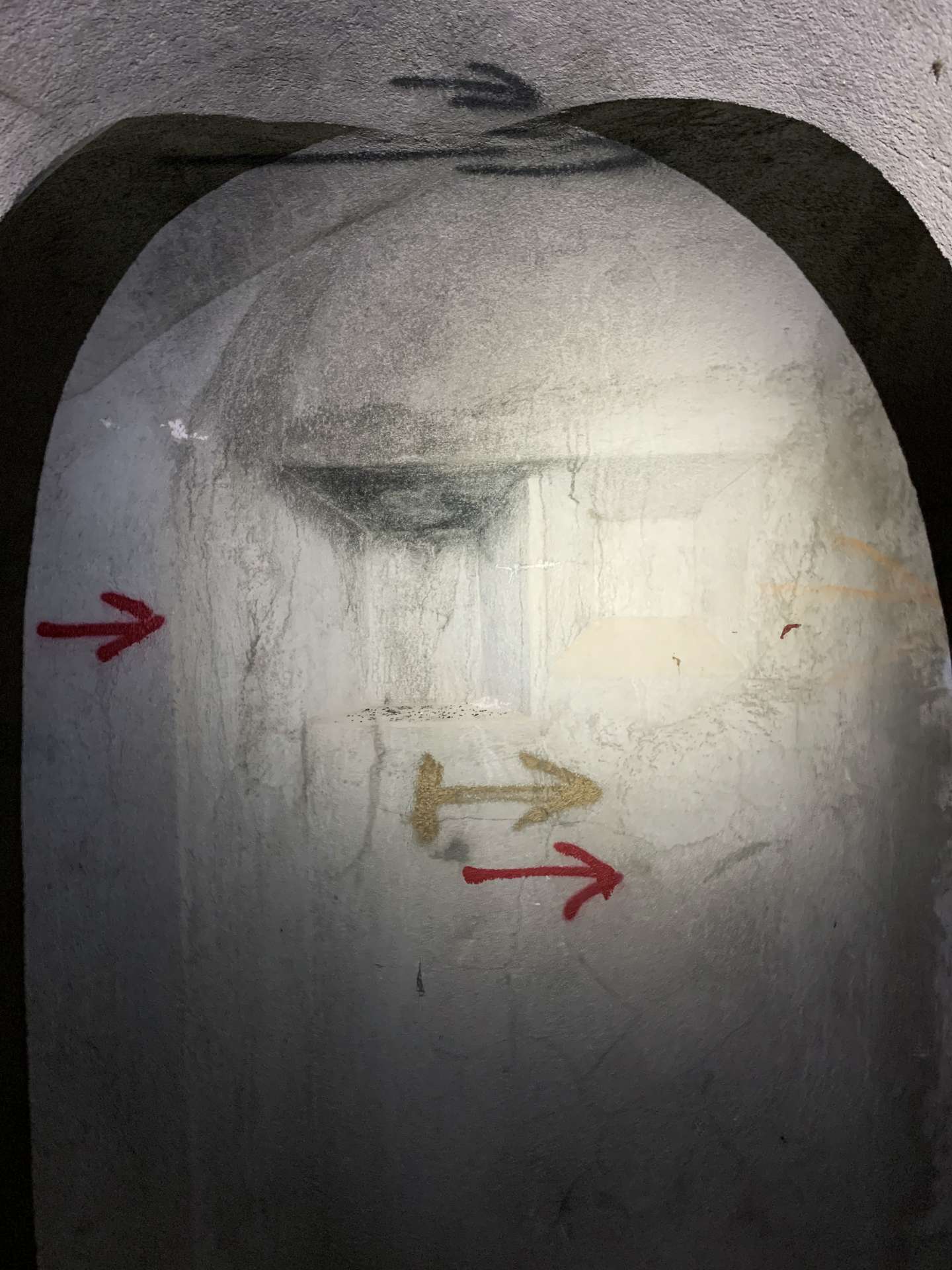 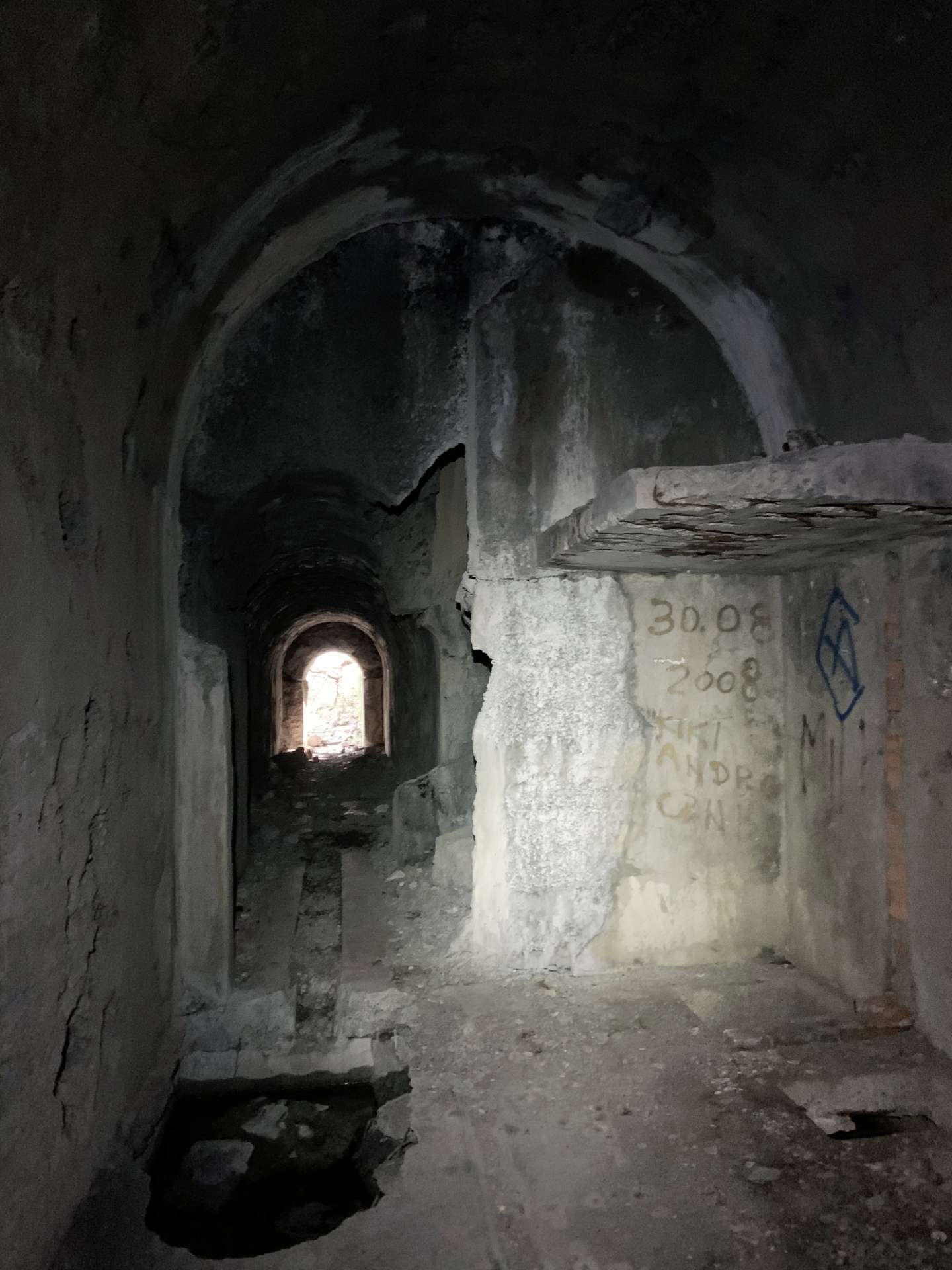 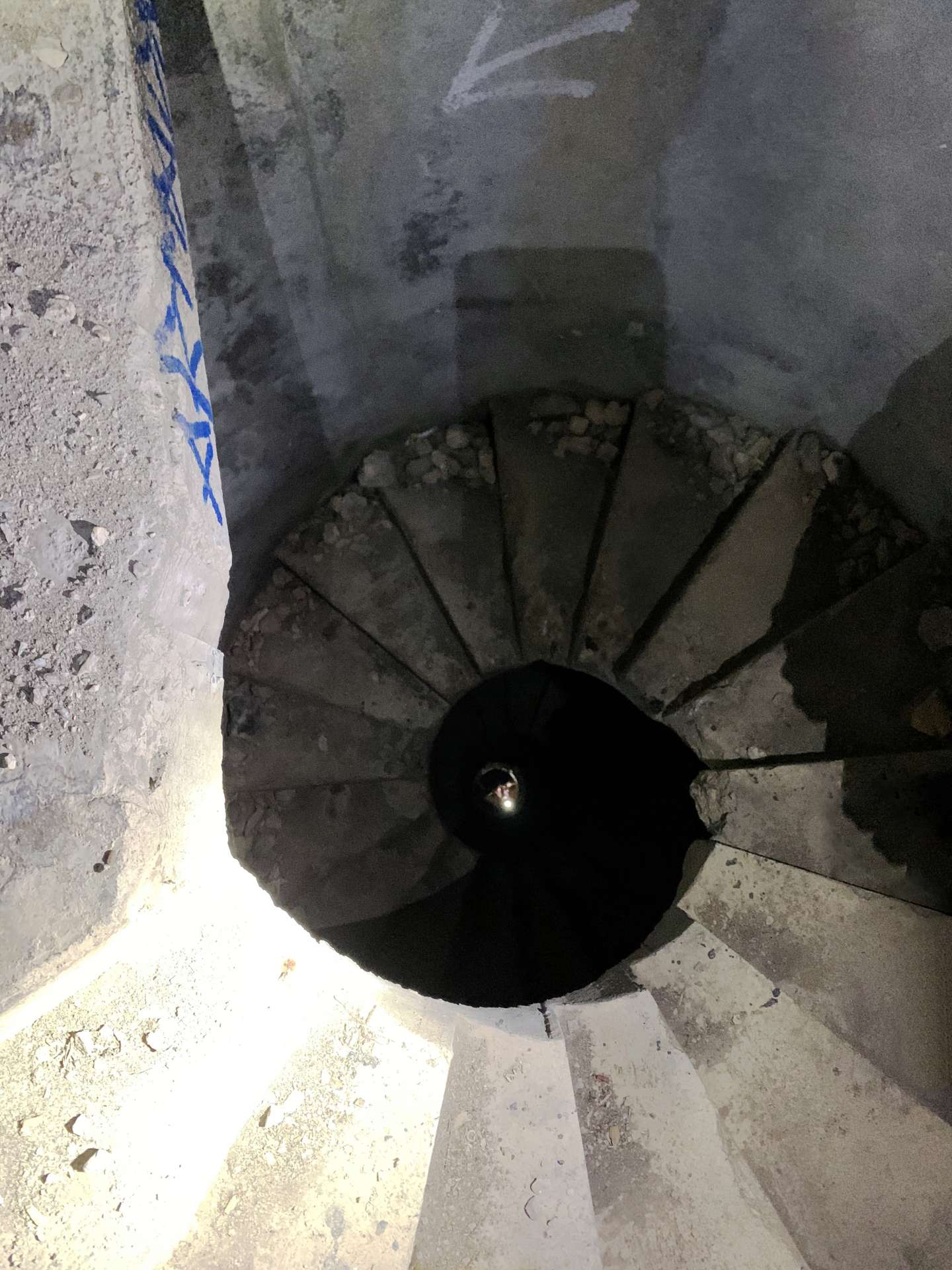 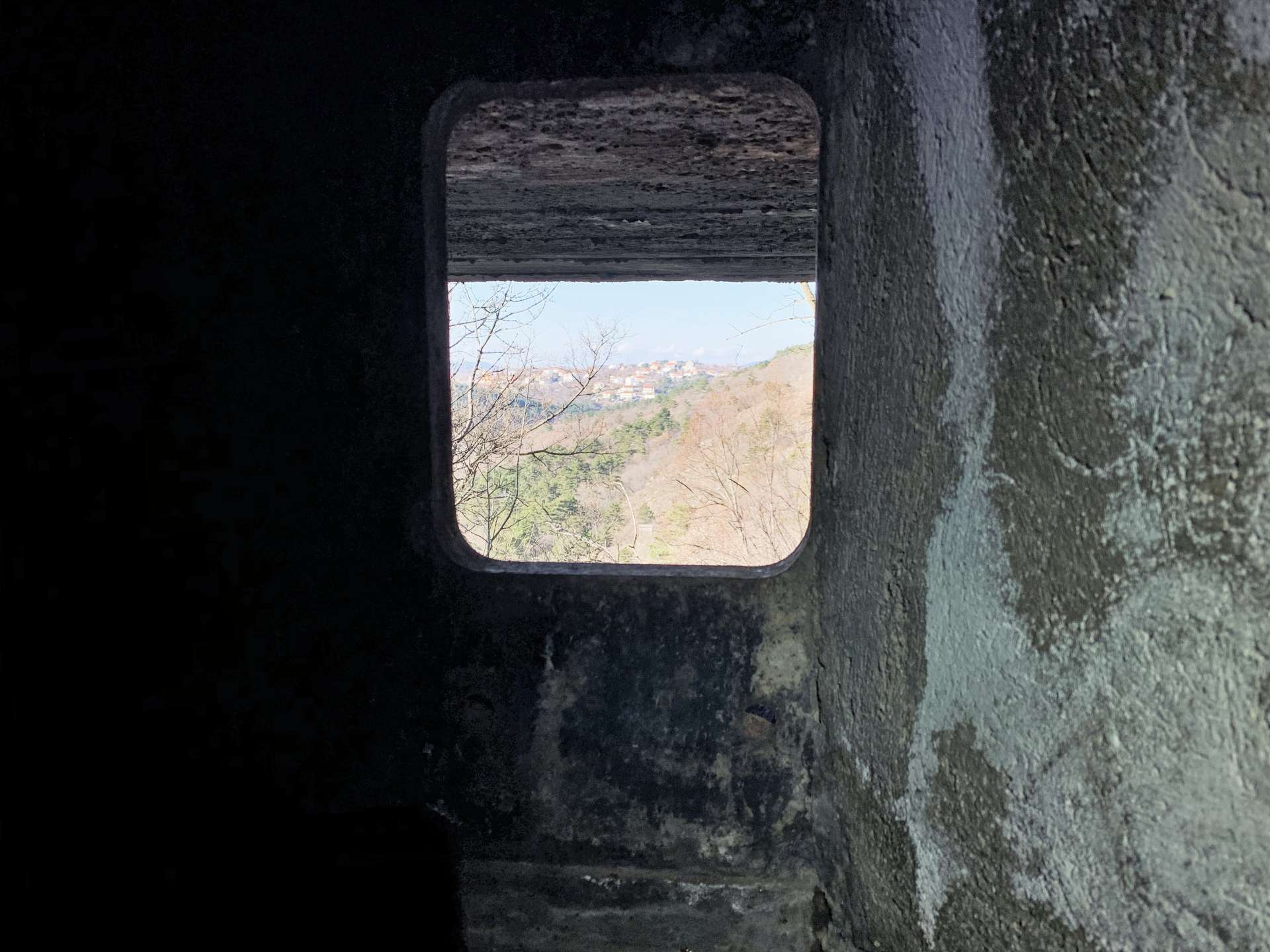 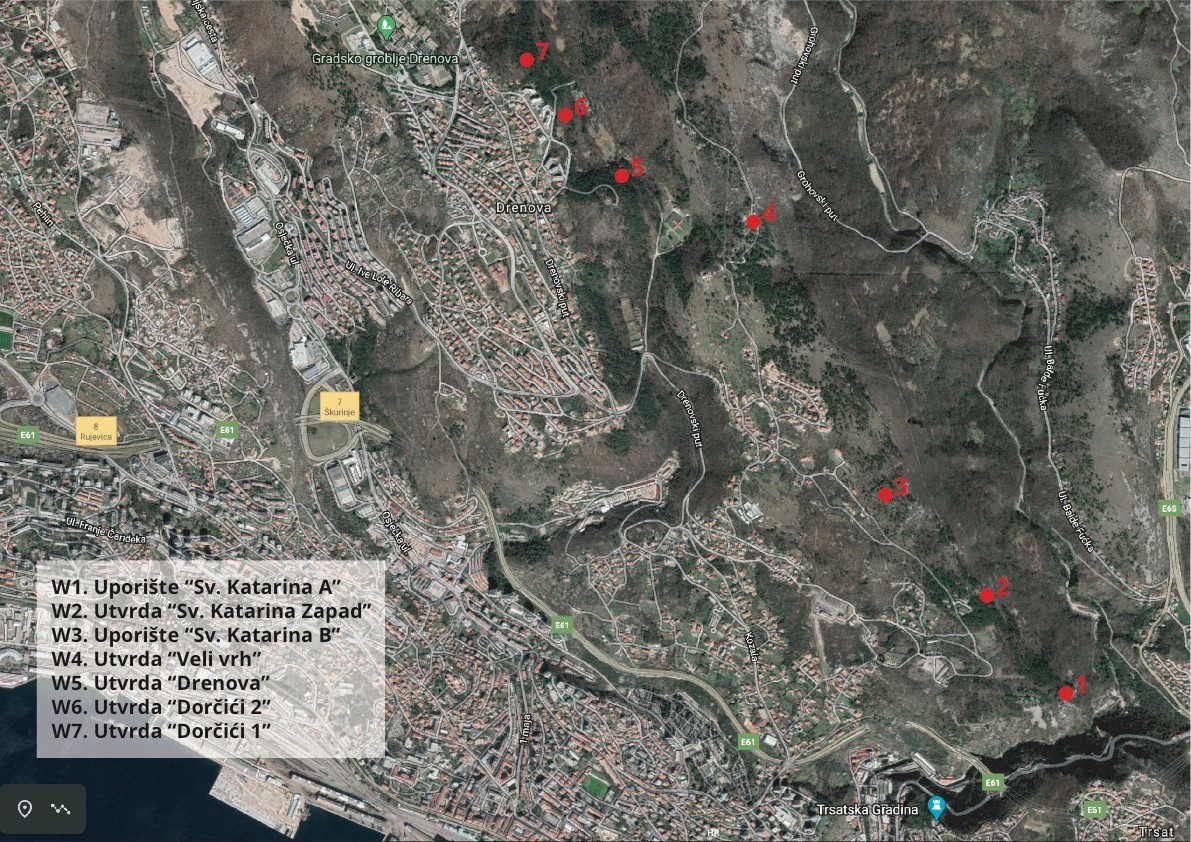