Solinska 70, 72, Split, Split-Dalmatia County, Croatia
Back to the list Back to the map
Typology:
Industrial building
Year of build:
1926
Original name:
n/a
Style:
n/a
Architect:
Josip Kodl
Past and Present Ownership of the Building/Site:

An example of a modern, functionalist industrial architecture in the 1920s (between the two World Wars) designed by the architect Josip Kodl. In architecture, Functionalism is the doctrine that the form of a building should be determined by practical considerations such as use, material, and structure, as distinct from the attitude that plan and structure must conform to a preconceived picture in the designer’s mind. 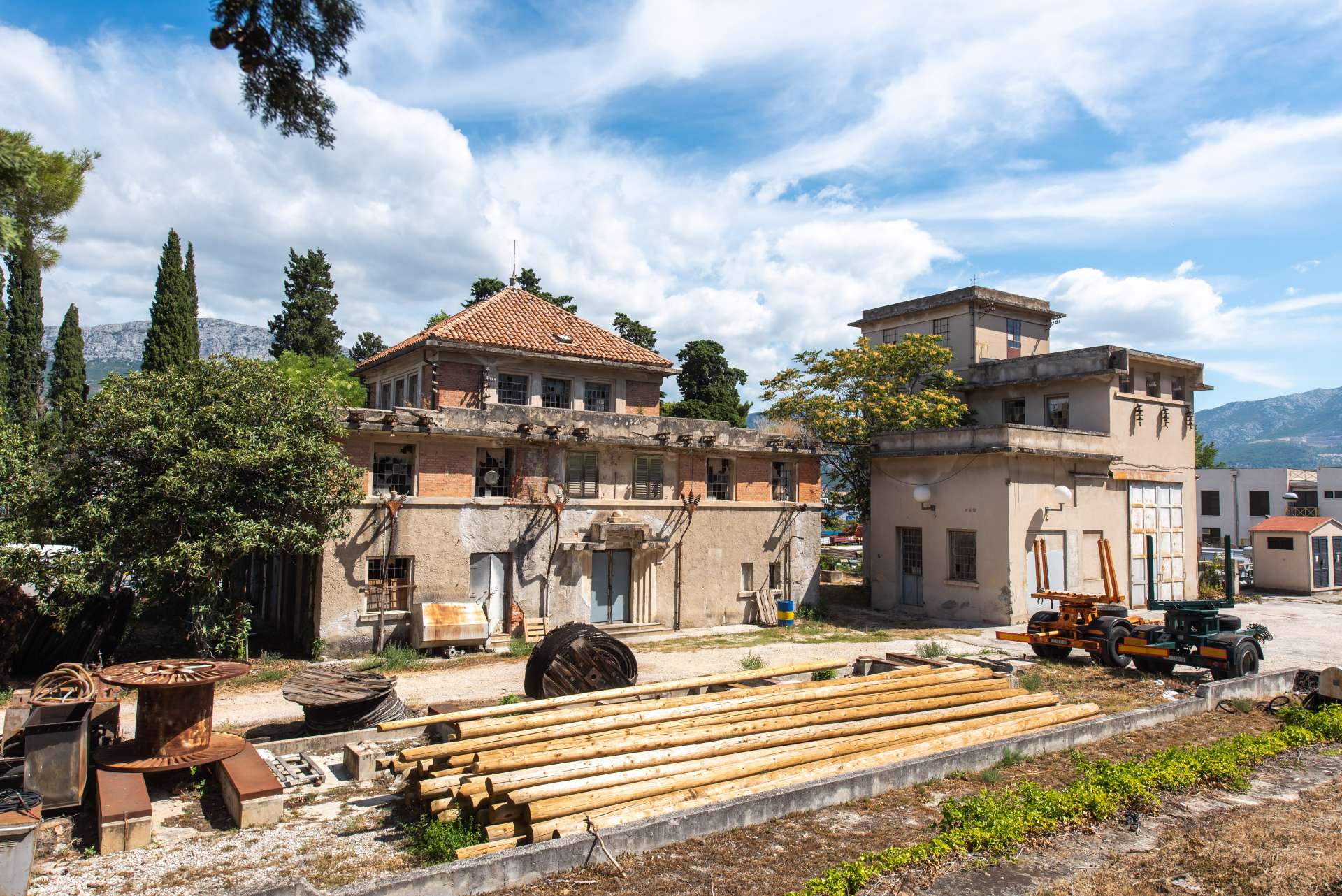 Erected at Solinska Street #70, Trafostanica was intended as the main power plant for the region. The one-story building is a rectangular square plan, built in a combination of concrete and brick material, with details in stone. Its design, especially in the details of the opening, in this case the main entrance with richly indented white stone frames, reveals the recognizable handwriting of the architect. In the middle of the building stands out the higher volume of the square floor plan, this ends with a four-story canopy ceiling, and rests on a protruding concrete roof. The rest of the building is covered with a flat roof. The ground floor is built in concrete and plaster, and the floor is in brick with properly arranged rectangular openings framed by smooth stone frames and molded in a grid of glass, to give as much light as possible to the interior of this utilitarian building. Only the two openings on the main facade, above the representative entrance, have wooden joinery not cut into the wall like the other openings. The unique interior space with the power plant has retained its original function to this day. The power plant at Solinska Street #72 differs from the adjacent power plant, with less decorative design and materials, and with the layout and height divisions of cubic volumes, flat roofs and simplicity as a whole, and in detail approximated the architectural expression of modernity that Kodl brought to Split architecture. Built entirely in concrete, it consists of three basic cubic volumes of different heights, the highest of which has a high ground floor and two floors. The part where the main entrance is located is the lowest and has only the ground floor, while the other part of the building has two floors. They all end with a prominent cornice above which is an Attic and a flat terrace. The windows are arranged in a regular rhythm, cut into the wall and molded in a screen of glass, with only white smooth stone windowsills. The interior retained its original appearance and function 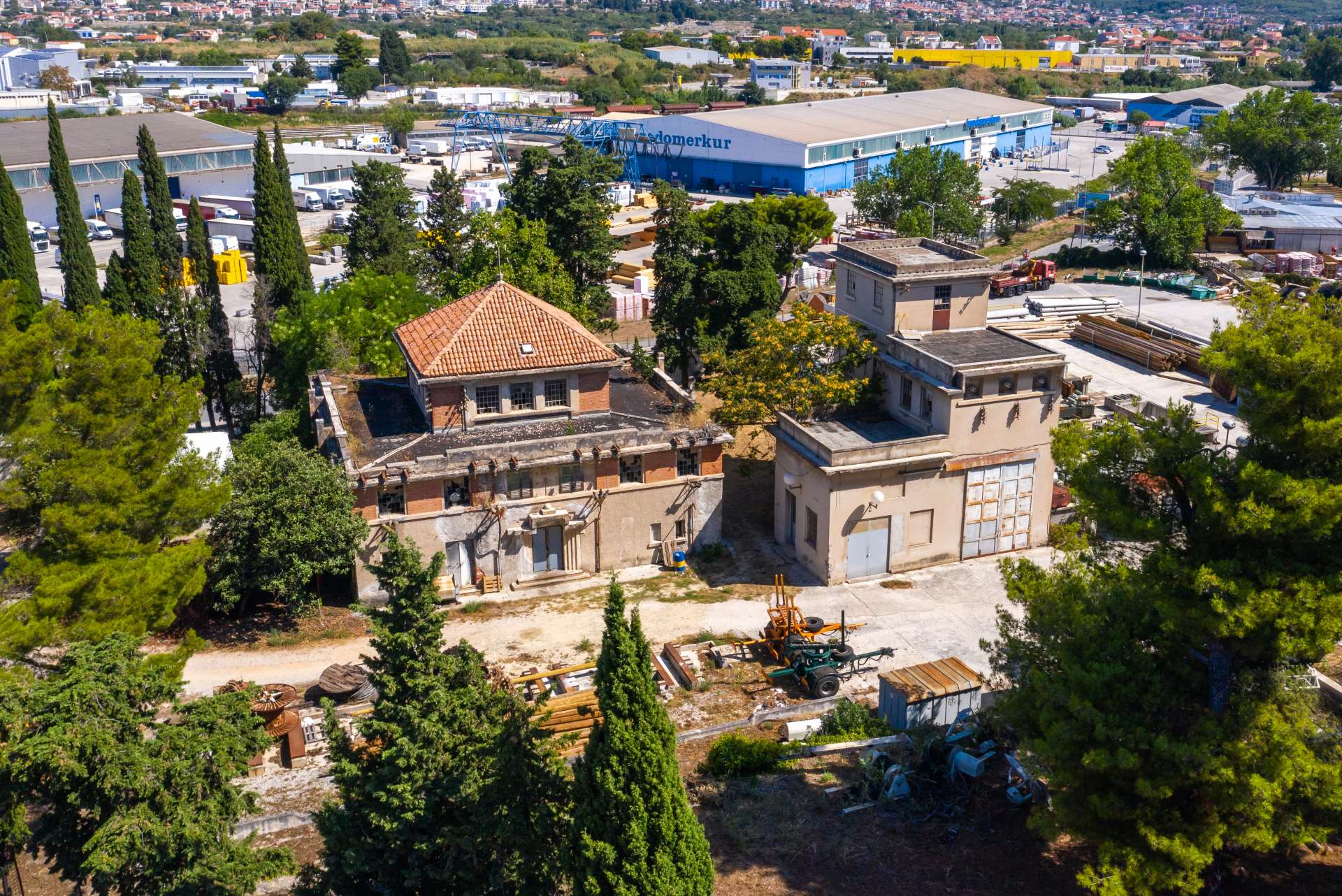 On the fenced plot in the Split area of ​​Dujmovaca, in Solinska street 70 and 72, there are two power plants on the route of the old road connecting Split and Solin. Both were built according to the design of Josip Kodl in 1926, when electricity from Dugi rat was brought to Split. The plot is separated from the street by a wall with an entrance portal made in combination of concrete, brick and stone and an interestingly shaped iron fence.

It is interesting to follow the historical but also urban development timeline preceding and following the year when Split received electric energy as well as the works on two power plants:

1927. For Split, electricity comes from Kraljevac HPP. Double 10 kV transmission lines were built from Dujmovača to Kaštel Sućurac and to Split Plokit and one to Majdan. A 36 kVA diesel power plant was built in Selce, Brac for the needs of the stone industry and site lighting. 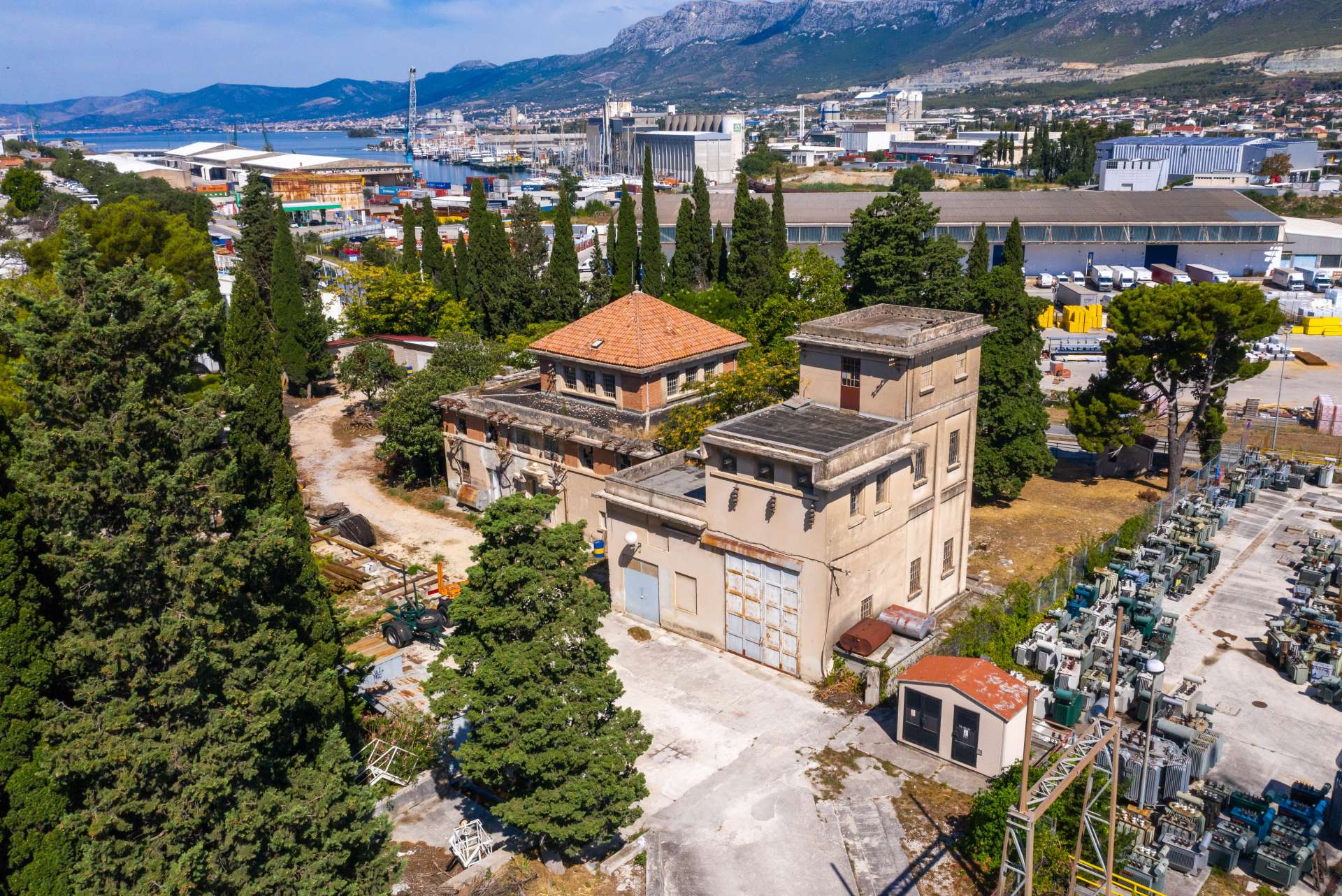 As a protected cultural property, power plants can be used for their original purpose, purpose for which they have not been used for some time, or for a purpose designated by the competent body, i.e. the competent Conservation Office of the Ministry of Culture of the Republic of Croatia or other bodies. In anticipation of the proper purpose of the power plant, the gaping, empty, functionless and lifeless gazebos have been decaying for decades. The City of Split's cultural strategy adopted this year brought an interesting initiative to revive the power plants through the Science Museum. 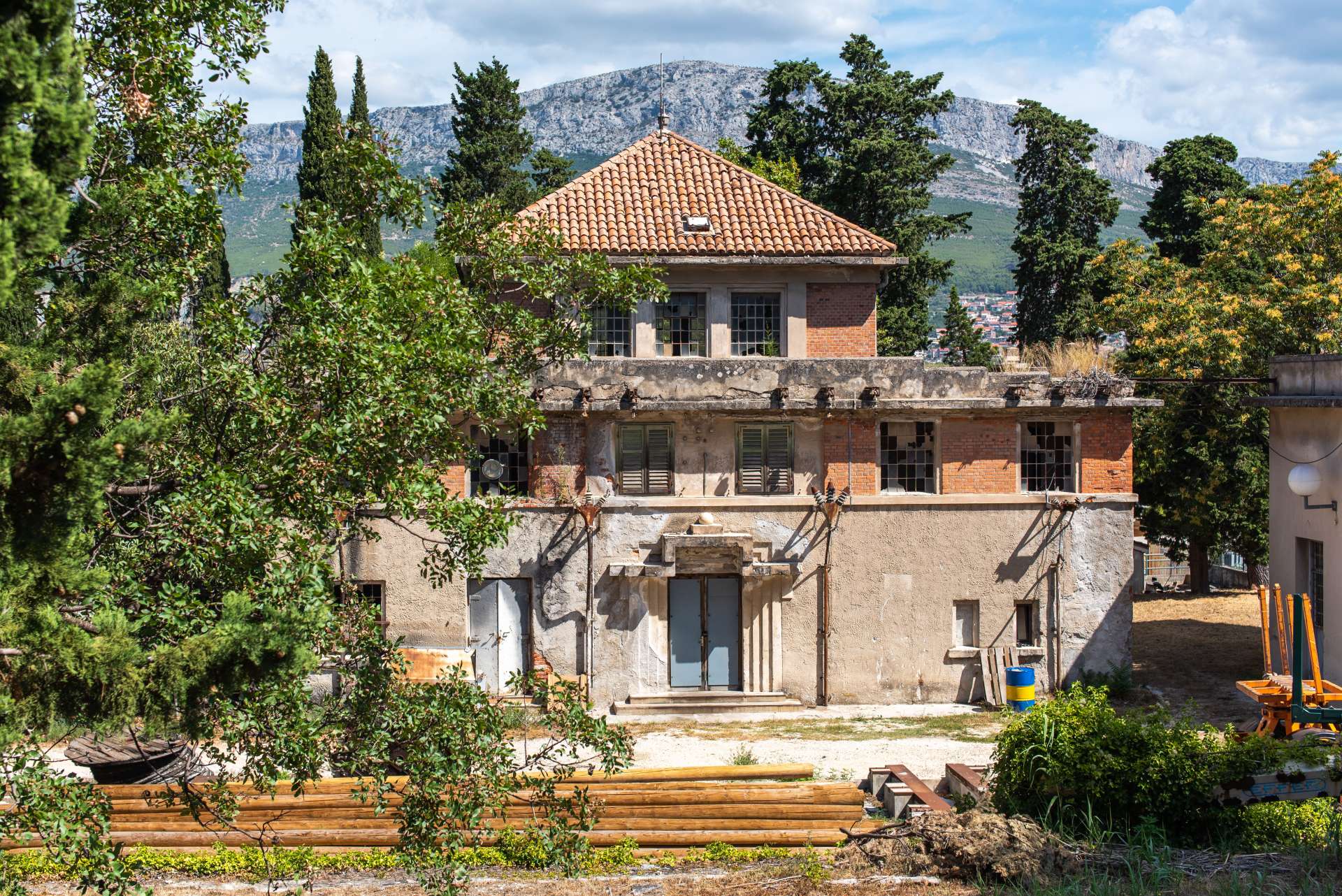 The area of ​​the city of Split, located on the margin of its peninsular spatial-urban organization, was named Dujmovaca, after the church of Saint Dujma from the 17th Century. According to the same church, the toponym Dujmovac was created as a name for the ravine, which is mentioned in the spatial plan of Split from 1831. Furthermore, in 1080 this area was called 'confinium territorii sancti Domnii' by the Holy Roman Empire. It is important to emphasize these quickly separated historical backgrounds with toponyms in order to indicate the historical complexity of the places that underwent a radical transformation in the post-World War II period, when it took on features that are more industrial. Over time, both production facilities and those of the business-warehouse type (Processing, Jadrantrans, Ilova, Koteks) were built. However, on this margin of the city where suburban houses were built on Solin street, in the first half of the twentieth century, a power plant was built as an essential element in the electrification of the city. This valuable part of the industrial architecture of the Czech architect Josip Kodl, representative of the functionalist currents within modernism, has been preserved today, albeit in a very neglected and dilapidated state. The next phase of transformation is experiencing this part of the city because of a changed political and social paradigm from the early 1990s onwards. Industrial plants were systematically terminated and/or converted into commercial zones. The recent preparation of the grounds for the construction of the Bauhaus shopping mall (on the site of the former Jadrantrans company) has led to valuable archeological findings. It is a late antique church building that is associated with the name of the patron saint, bishop of Salonica and the martyr of St. Duje. 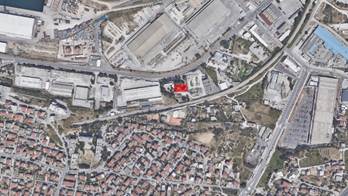 1. RT (Workplace) Coach / Transformer - A Critical Perspective. This project proposed by OUR – NGO for culture and visual art, founded in 2010. Members: Alemka Đivoje, Dalibor Prančević, Robertina Tomić. (M.K., 17.10.2012) would seek to draw attention to the transformation of the urban area and the memory it offers, pointing to the unusual symbiosis of energy fields that have been historically - unequivocally marked by this area of ​​the city. A curatorial and artistic intervention would be carried out in this area as a platform for the 'instigation' of attention and the provocation of 'memory'. When discussing Dujmovaca then, one should not forget that its positioning enters the discourse about the peripheral space.

2. The idea of ​​the Museum of Science, which was included in the Culture Strategy in 2015, was previously born by the director at the time Budanko, but was not realized due to the Homeland war. Architect Ivanisevic continued to push the idea and in 2010 brought together a number of academics and professors who, in the hope of establishing a Museum of Science, they have drafted a museum study and, in the hope of establishing a museum, signed a charter. Apart from architect Ivanisevic, Nenad Cambi, Zeljko Kovacevic, Ante Maletic, Damir Sapunar and Gorki Zuvela were also there. The idea of ​​the Museum of Science is based on the museum as a site of presentation and dissemination of specific knowledge, with the specific aim of developing young people. The specific knowledge suggested by the initiators of the museum would be from the fields of sea, energy, health, ecology, construction and computer science and the exhibition would be realized in cooperation with the faculties of Split and industry. In addition to its role in promoting science, the development of museums at this site contributes to the revitalization of the entire area, which in some developmental vision of the city has the potential to become one of the most important focal points and the preservation of architectural heritage in public use. By including the Museum of Science in the Culture Strategy, the City accepted the idea and to some extent committed itself in realizing it. The next key step in the realization of this idea is the cooperation with HEP, which owns the power plants as a possible co-founder of the museum. The "negotiations with the City of Split are currently at the level of preliminary design of the site, and the administrative settlement of the legal basis of ownership of the future museum is underway." In all likelihood, the story around the Science Museum is developing positively. Still, the path to creating a museum is a long one. Much of what has been achieved so far is the result of the efforts of enthusiasts gathered around this initiative. The agreement between the City and HEP is only the foundation on which the new museum can rest. This is followed by advocacy with the Ministry of Culture, more specifically the Croatian Museum Council, which must accept the museological program, conceptual design of the museum's layout and function and the budget itself. Also, regarding protection, the Conservation Department within the same ministry must approve a new purpose and a plan for the reconstruction of buildings. 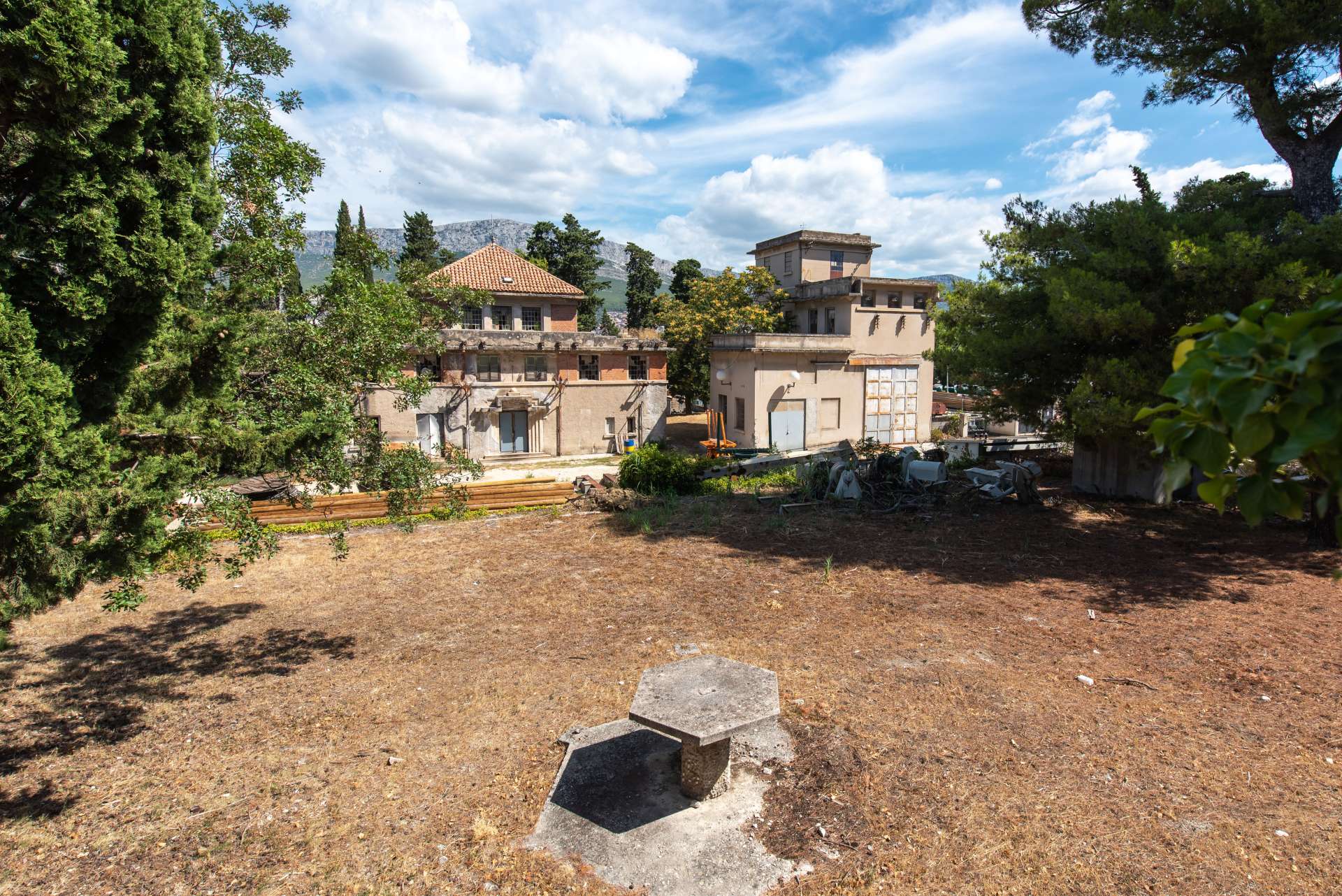 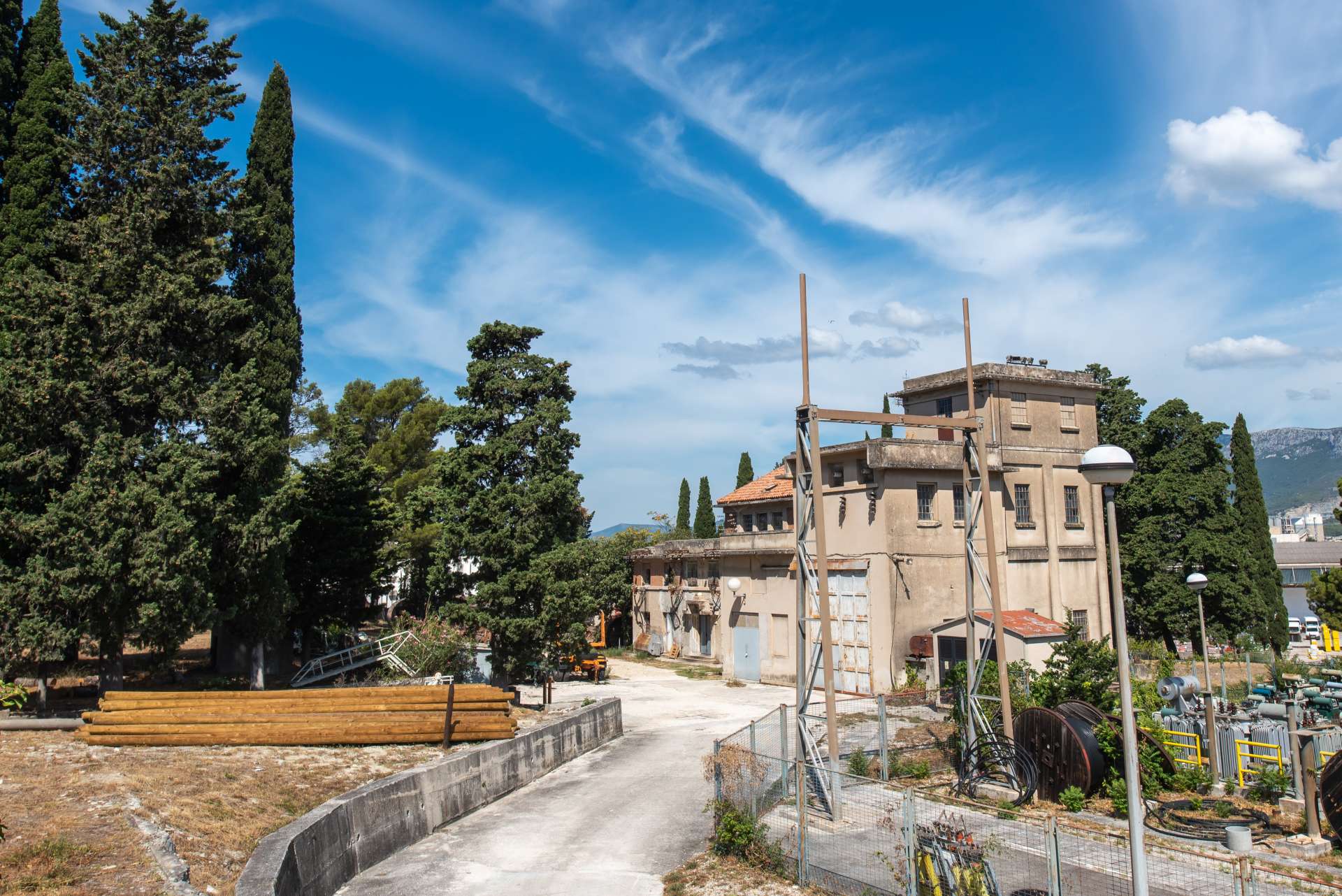 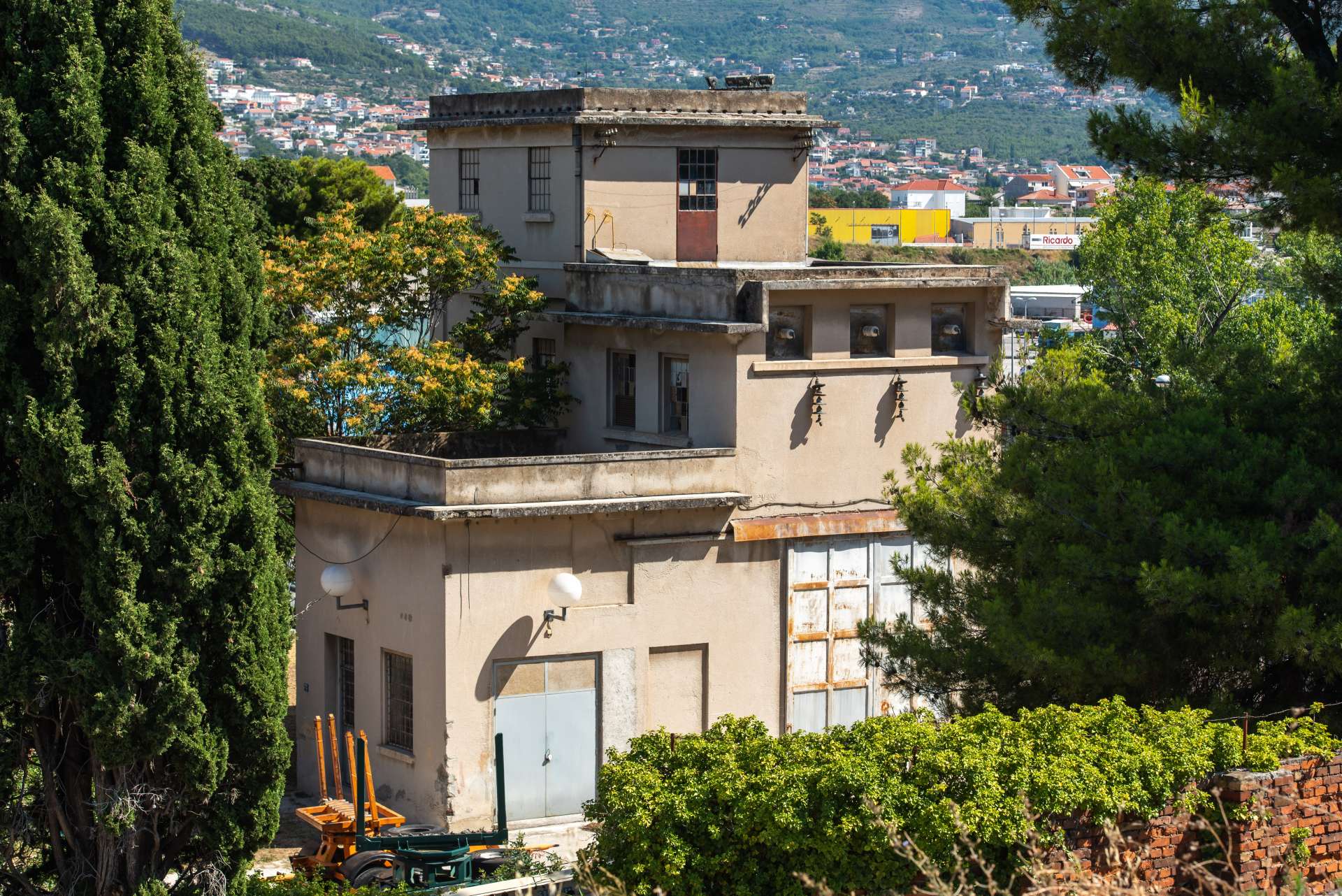 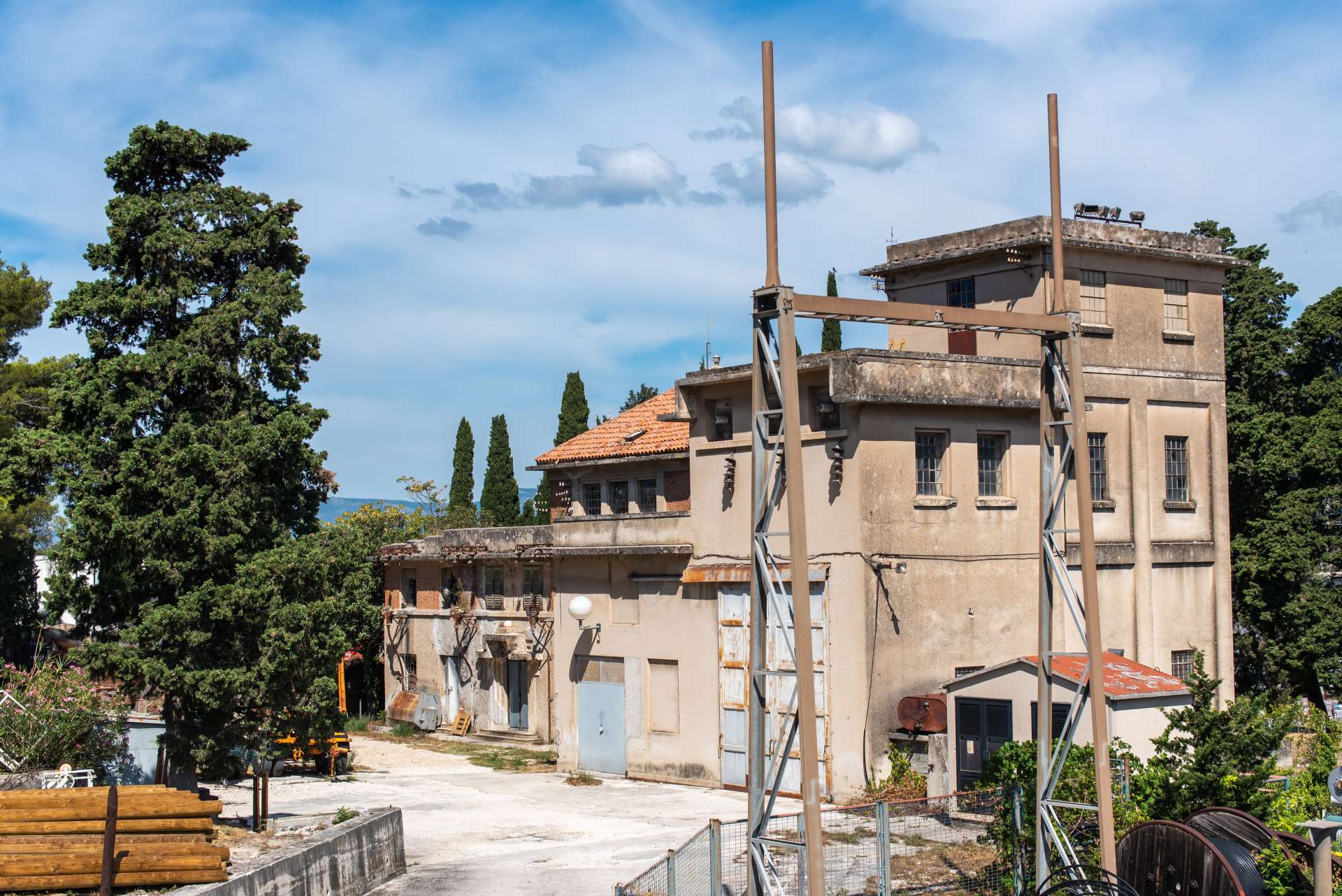 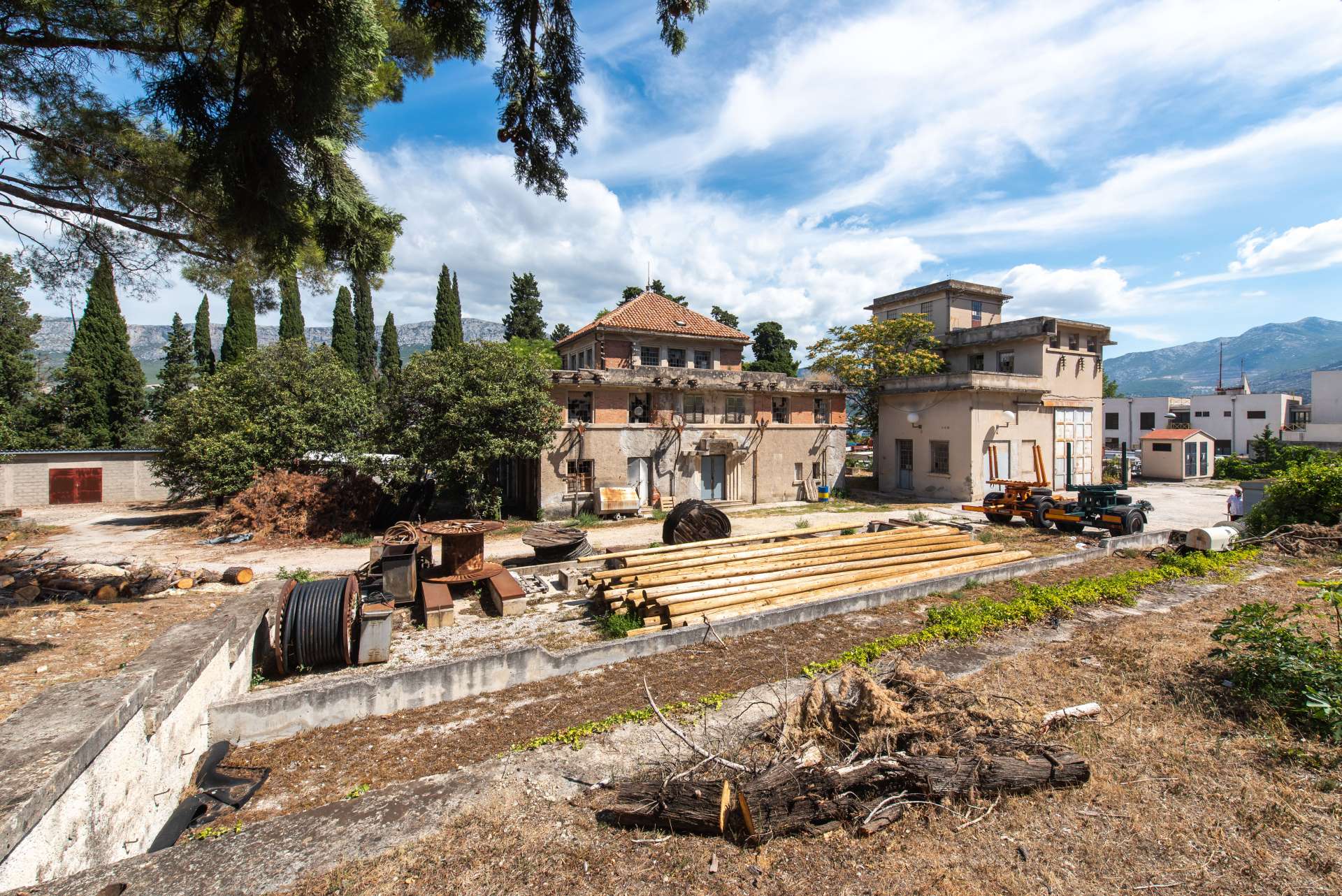 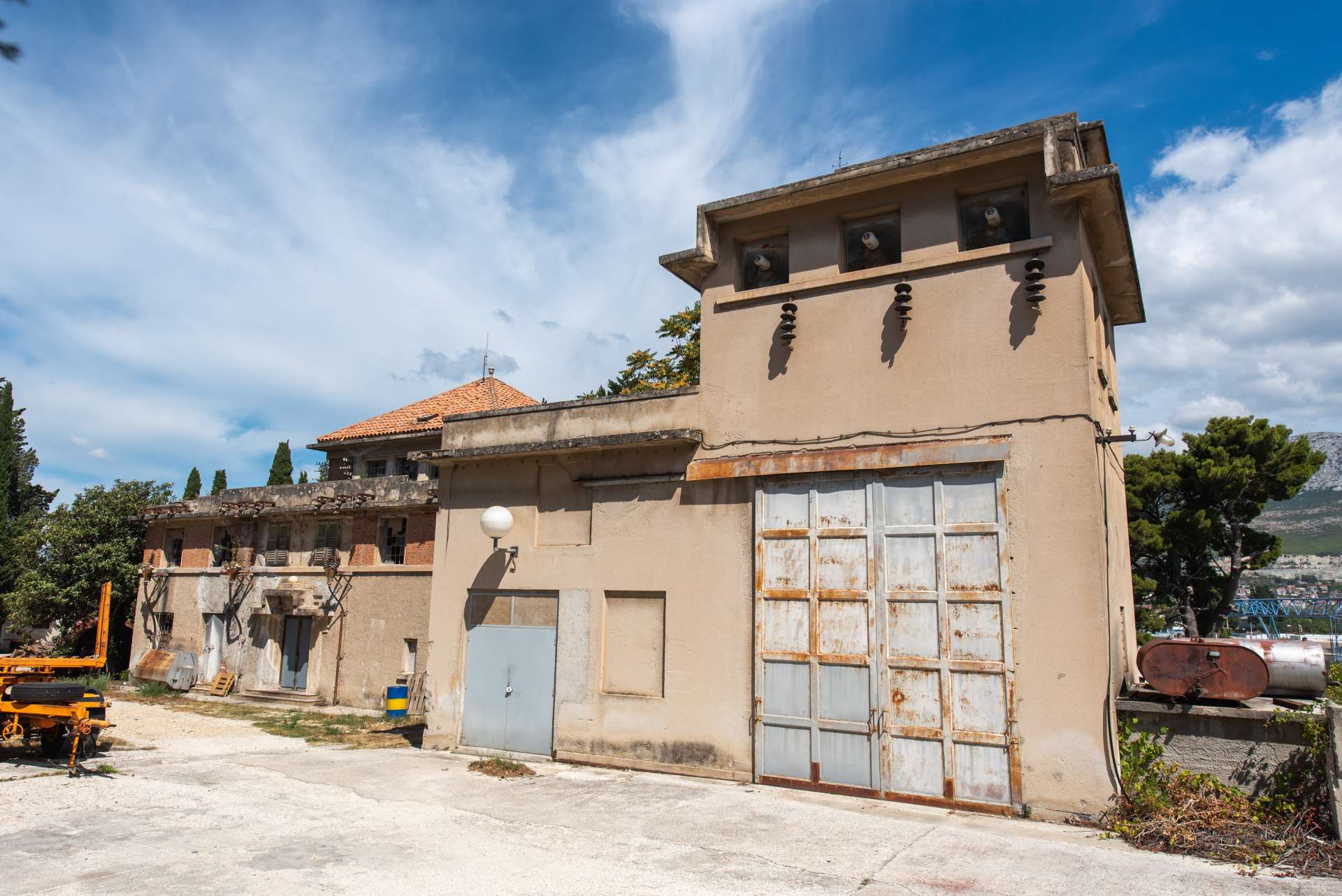