Alojzija Stepinca 23, Trogir, Split, Split-Dalmatia County, Croatia
Back to the list Back to the map
Typology:
Motel
Year of build:
1965
Original name:
n/a
Style:
International modernist
Architect:
Ivan Vitić
Past and Present Ownership of the Building/Site:

Style: emblematic of architecture developed primarily for travellers in cars. 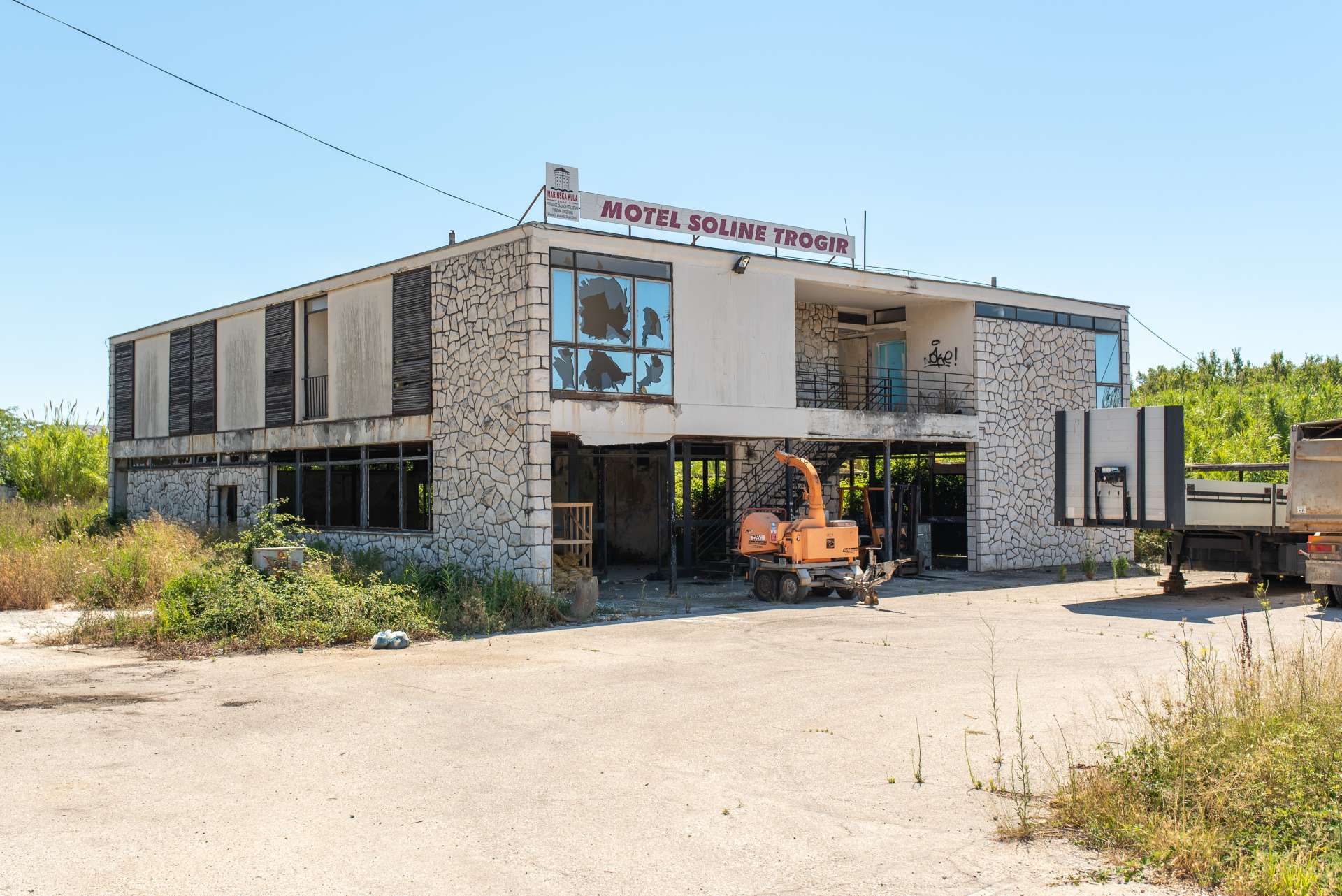 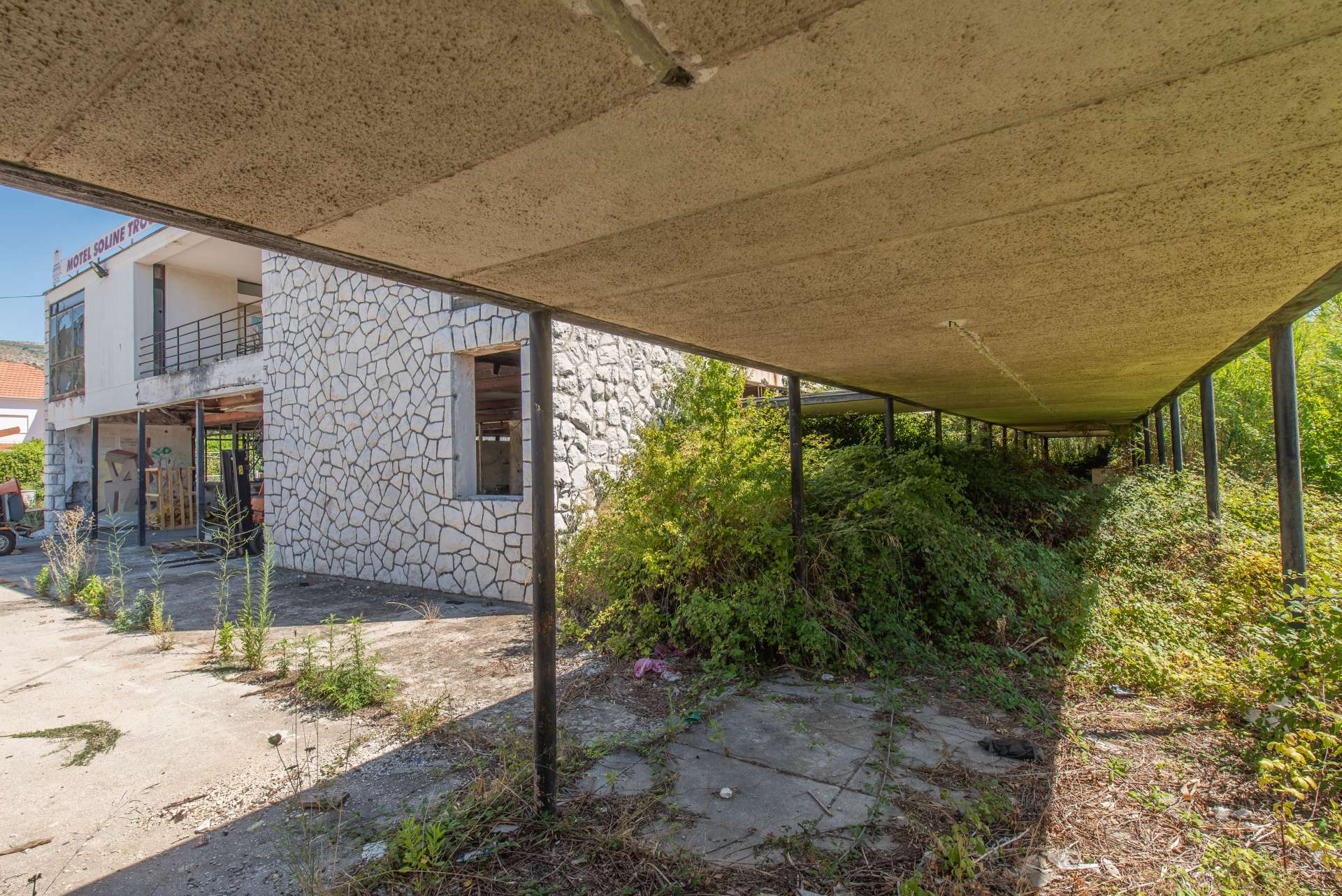 The Sljeme motel chain along the new highway, designed by architect Ivan Vitić in 1965, is emblematic of architecture developed primarily for travelers in cars. This motel could even be considered as an exten­sion of the highway, a tourist architecture that differs from the subsequent period when tourist com­plexes were built en masse along the coast and designed exclusively as final travel destinations.

Almost everything in the structure was designed to accommodate to car travelers. The main building contains a reception desk, a kitchen, a restaurant, and an open-air terrace, with the guest rooms on the first floor. There are two separate annexes and two types of detached pavilions. The basic unit of lodging is an extension from the smallest of the accommoda­tion facilities, a series of bungalows clustered around the core. Other structures are formed by multiplying this ini­tial unit, ranging from other bungalow types with two to three units to three level annexes with a greater number of rooms.

The motel is located on a very steep and cramped slope overlooking the sea, and the view of the open sea and the islands is spectacular from its elevated position. However, the terrain has forced Vitić to abandon the trademark U-shape of his core buildings. They are now set longitudinally, along the ridge. The main building and the shop stand above the access road, while the one level annex is dug into the ground, with the ground-level terrace as its roof. Below this linear core, Vitić added another annex and additional bungalows. Vertical retaining walls along the downward-sloping road are clad in stone to blend in with the sur­roundings and to control the view of the driver. According to the original design, when a driver enters the complex from the highway, the road would first take the driver under the motel’s main building, which towered above the road. A sharp turn would then open the view to the sea in an almost ceremonious, solemn approach to the parking lot, where car passengers could enjoy the views of the open sea. 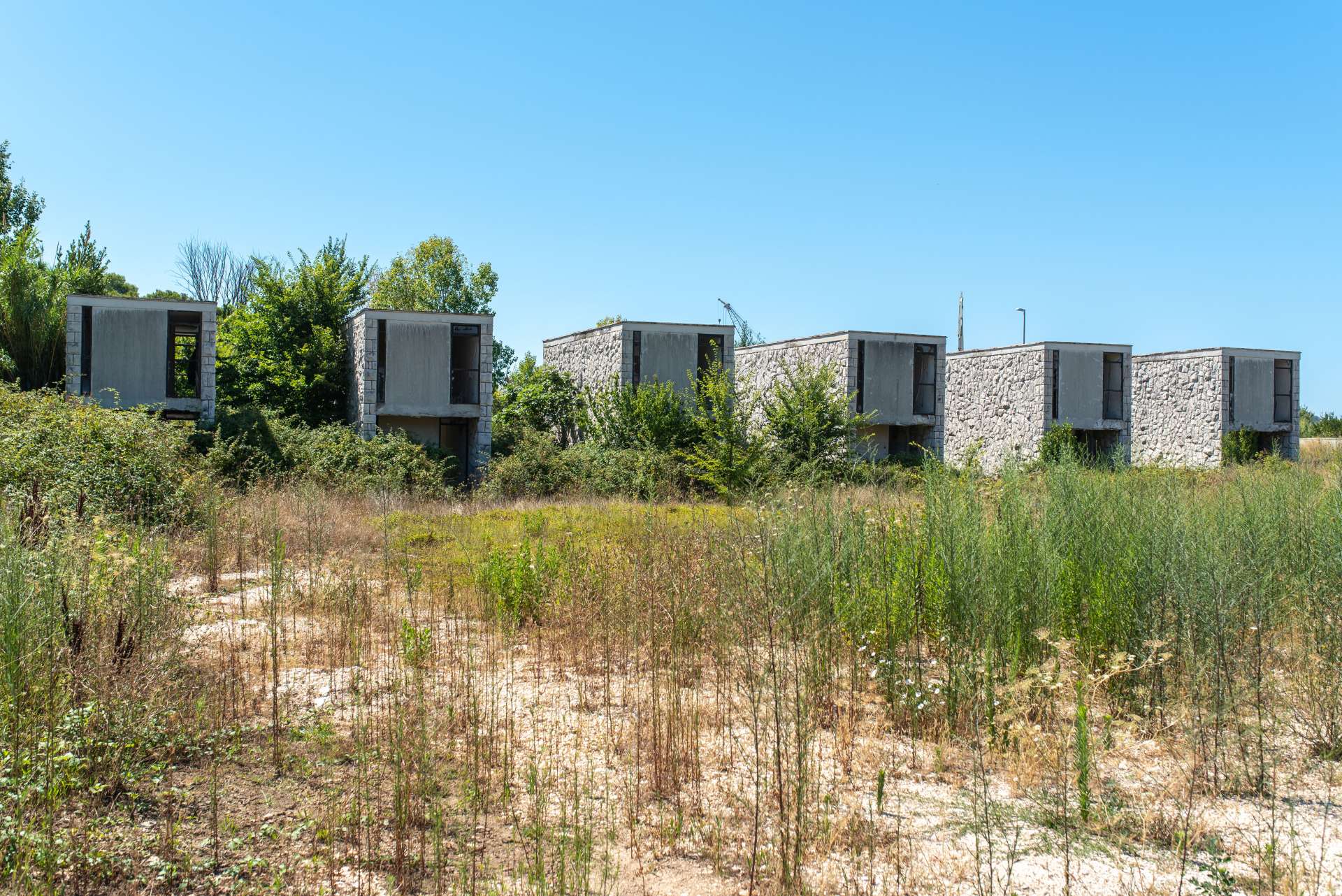 The construction of the Adriatic Highway began in 1954, the result of the modernization of the Federal People’s Republic of Croatia. The aim was to develop a unique transportation system and by doing so, to help create a cohesive territory from previously disconnected fragments of coastline. It was not until the 1960s, (thanks to the state’s increasing interest in tourism), that traffic increased dramatically.

Architect Vitić, a passionate driver, drew front views of the annexes with automobiles parked in front to a remarkable level of precision, even greater than in the actual motel designs themselves. These parked cars, each of them dif­ferent, dominate the foreground instead of the façades of the buildings. The surroundings of the motel are designed in an orthogonal system, within which all individual buildings can be reached by car. Individual bungalows and the interstices between them do not only frame segments of nature and bring rhythm into the landscape — they enable the cars, for which the interstices exist, to have a view of the sea or the trees. The view through the windscreens of the parked cars is the same as that from the rooms of the pavilions. The bun­galows are the most compact and most poetic part of all of the designs. The two-level structures were meant to be occupied by only a single family. On the ground floor, only three meters wide, is a living room and sanitary facilities, while the first-floor houses two bedrooms, accessed via a steep stairway resembling a ladder. Although the size could not offer the level of comfort that would soon be demanded by tourists, these cramped dimensions hint at the intended brief stay of the guests, while simultaneously directing them towards the more intensive use of the external areas of the motel complex.

These accentuations of rhythm, views, and invitations to use the landscape reflect the architect’s design process. He displayed a specific sensibility for a close relationship between a new means of transportation and the type of tourist structure developed to best accommodate it. He utilized the scenery as seen from behind the wheel as one of the key elements in organizing his architectural complex.

The construction of the highway initiated two parallel pro­cesses with far-reaching consequences. The first was the state-sponsored, large-scale development of the tourist industry, and the second was the excessive construction of private secondary housing, mostly on former vineyard plots, a move also intended to accommodate the influx of tourists. Both processes permanently transformed the coastline and the appearance and use of the road that had triggered these processes. 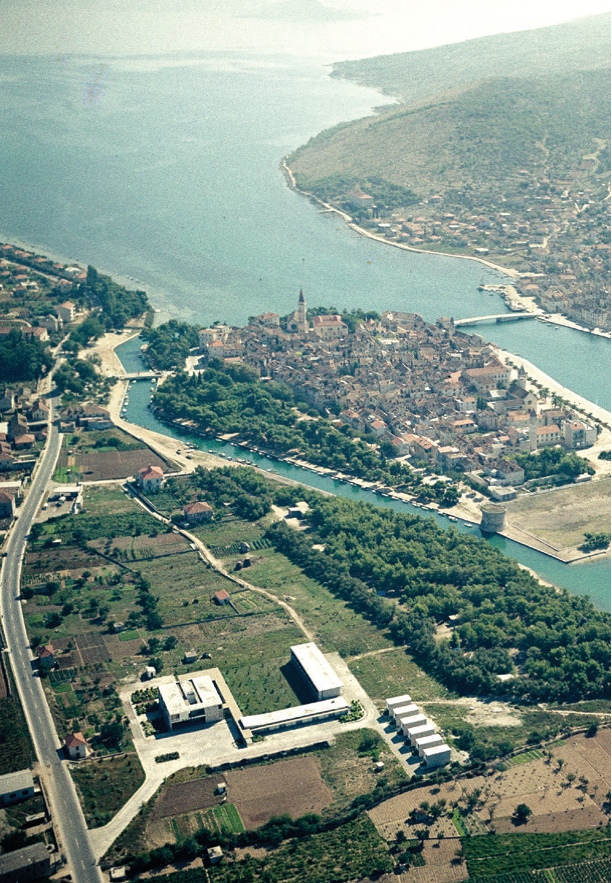 Vitić separated the architectural design of this motel structural layout into a sequence of functionally and formally differentiated buildings, unlike the earlier motels built along this route. Those motels were compact, freestanding buildings with a parking lot facing the road, the designs completely oblivious to their natural settings and the creative possibilities offered by the landscape. The paramount feature of Vitić’s motels is the multiple and varied entrances into individual residential units, which were mostly connected by covered passages and immersed within a lush, Mediterranean landscape. This distribution of entrances and possible routes through the complexes created a stage for encounters as a simula­crum of a typical Mediterranean town.

Vitić rationalizes the element of variation by saying that ‘Adriatic Highway, with its cultural and historical natural aspects and with its endless variations, does not tolerate templates in the shaping of spatial sections, but rather demands a unified architectural rhythm’ (Vitić 1967). The changes in the distribution of the buildings’ positions within particular sites go hand in hand with Vitić’s eval­uation of the highway as a long and monotonous path, and with his aspiration to use his motels to materialize the dire need for diversity and the articulation of a spatial ‘rhythm’.

The well-known logo of the Sljeme company, a boy wearing elements of a folk dress, is present on a tall advertising column depicted on the perspective view of the complex, which leads to the conclusion that this project may have been the first of the Sljeme motel chain. 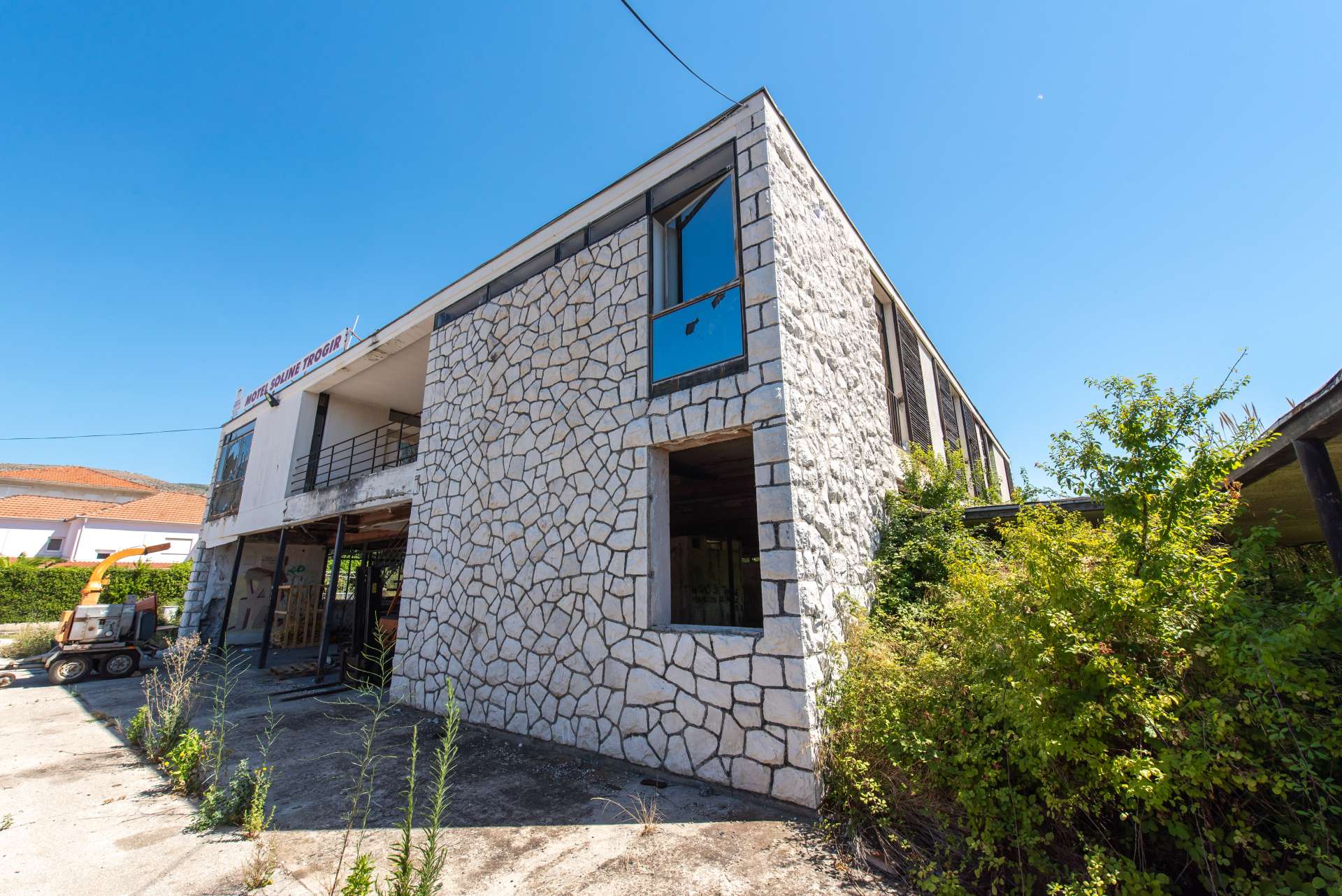 The development of the contemporary highway system, which coincided with the development of air travel, irrev­ocably changed how tourists arrived at the Adriatic coast, thus changing their perception of it. It also brought about an expansion of typologies of traffic infrastructure. In the latter part of the 20th century, with the planning of trans- European corridors within the broader context of tourist migrations, the importance of this area has changed. New itineraries, together with decades of expansive construc­tion, slowly blurred the articulation of the original route of the Adriatic Highway. The repertoire of its construction elements, from its stone safety posts to its stone walls clad by hand, has aged and eroded, as have Vitic´’s motels. Recently, efforts to bring them back into use have been aided by a growing interest in preserving post-war modernist heritage. Only two of the motels from the Sljeme chain were recognized by the state as cultural heritage in 2013 and 2015 and are therefore listed for protection. Nevertheless, the state has done little to raise awareness of their decay and the need to protect them — instead, the impetus for this has come from the work of an NGO called ‘Loose Associations’. The motel chain deserves to be systematically re-evaluated, as well as protected, as a testament to a rare, successful synergy of the technical, architectural and landscape design culture. 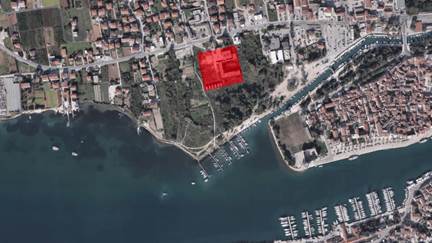 Artistic interventions - The project "Motel Trogir" started with an educational series of lectures and mentored walks. They continued with artistic interventions, such as the one of Neli Ruzic who intervened in the motel in Trogir by a mondrian installation. Finally, there is a text presentation titled "Trogir Motel - Not the Future is Coming". This consists of thirteen texts illustrating the history and context of Vitić's motels. So Jakovina writes about the political moment of Yugoslavia in the 60's, Daphne Berc on the general features of tourist construction in the SFRY, Melita Čavlović on the origin and economic effects of the Adriatic Highway and Tamara Bjazevic Kirin about the architect Vitic himself. 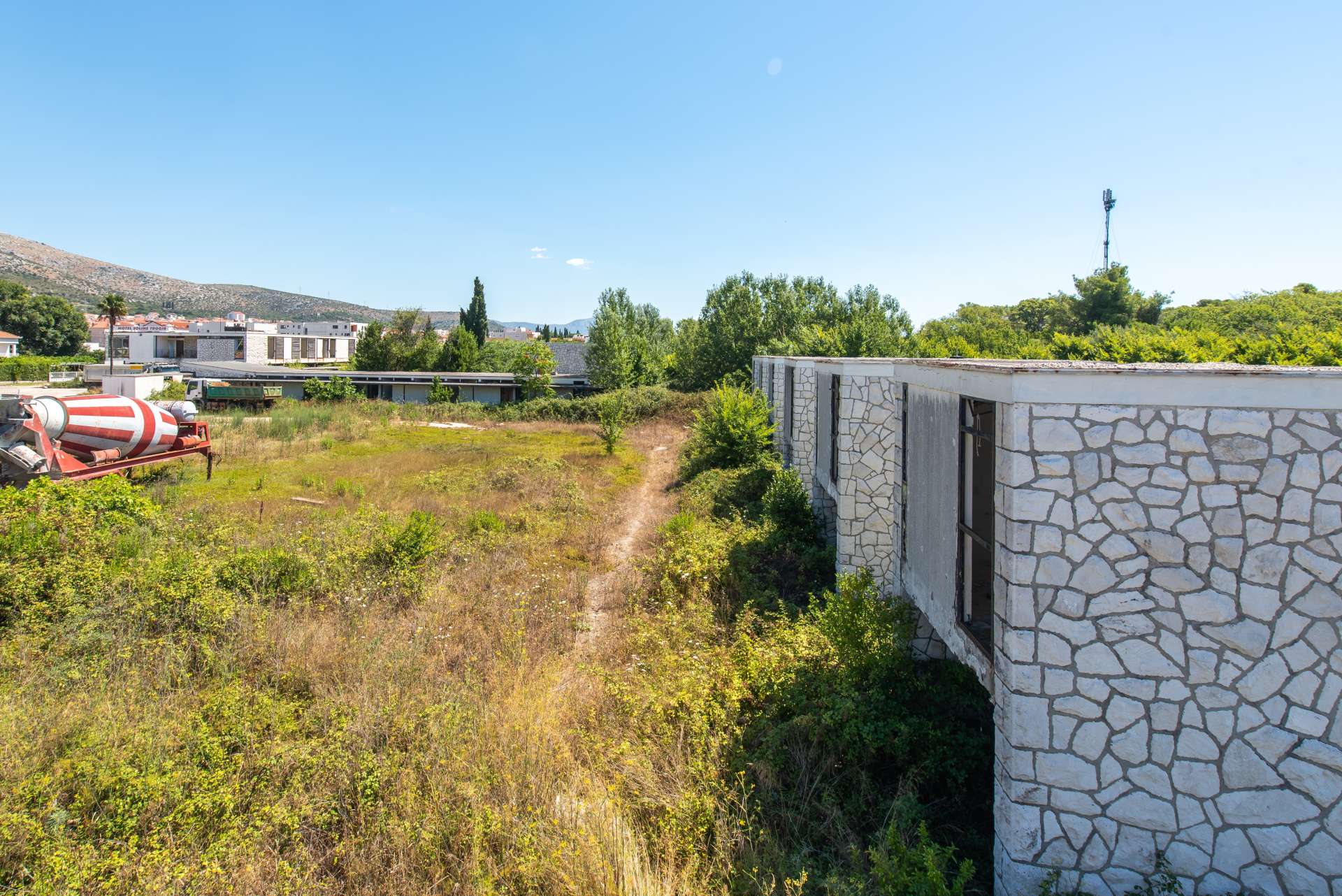 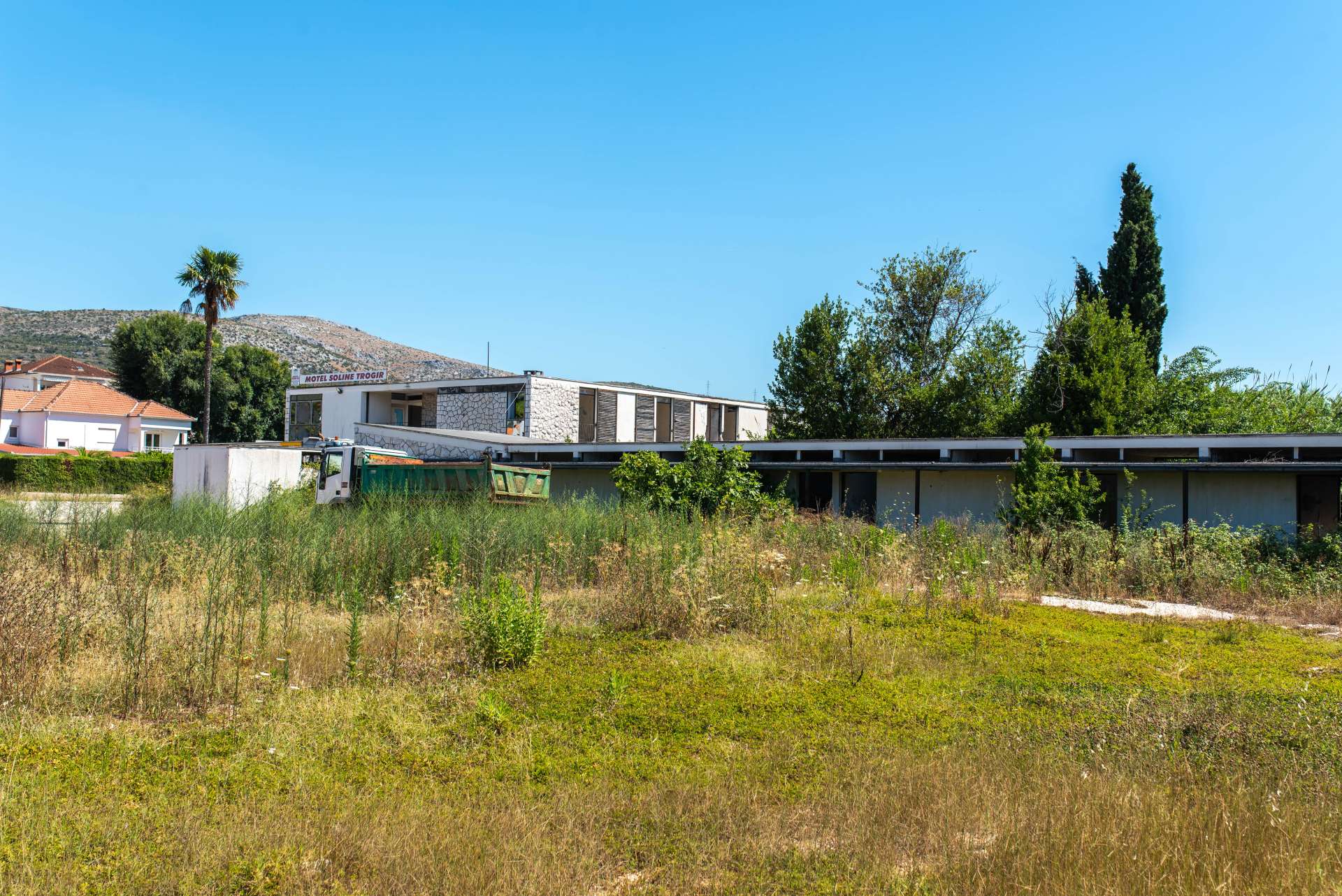 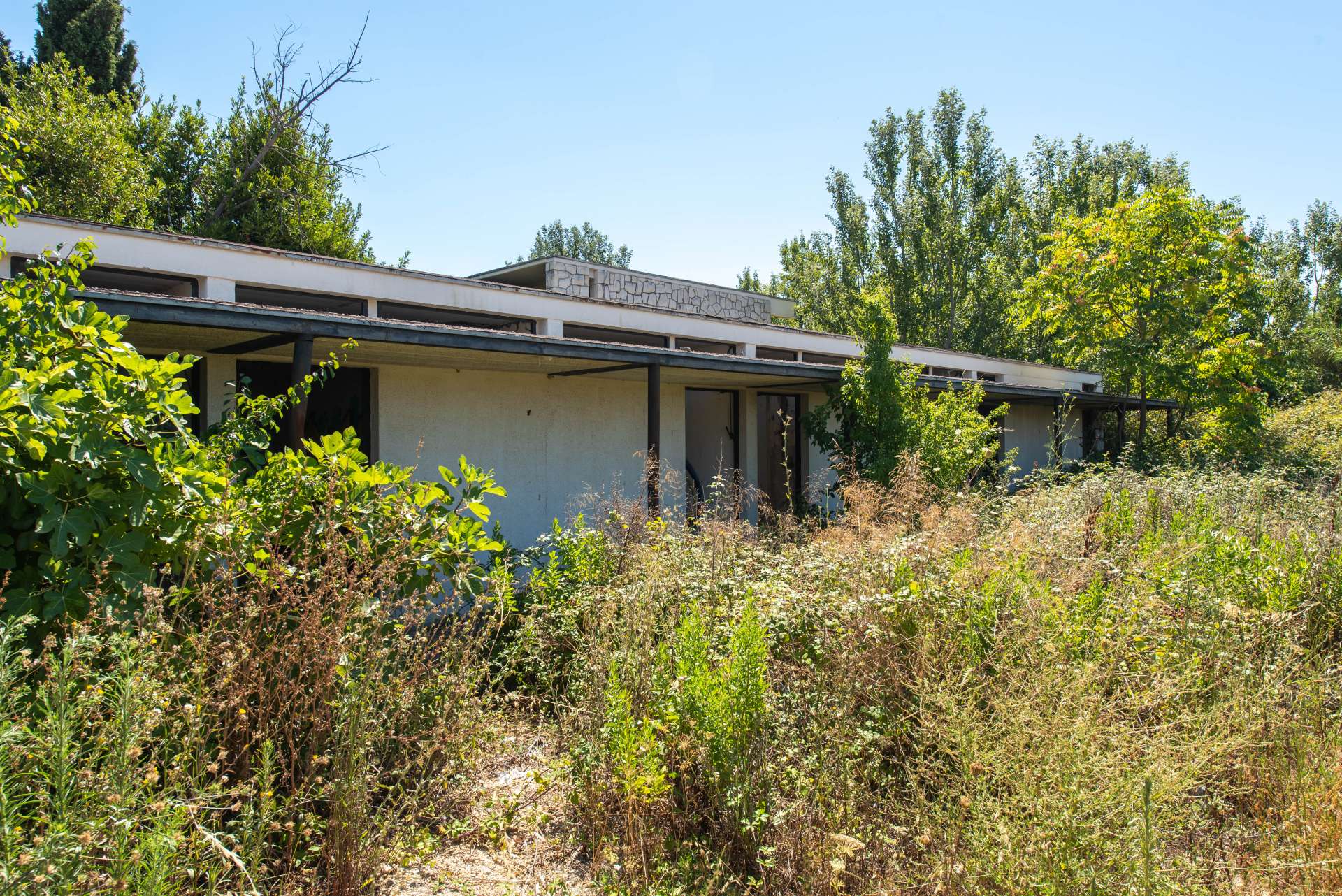 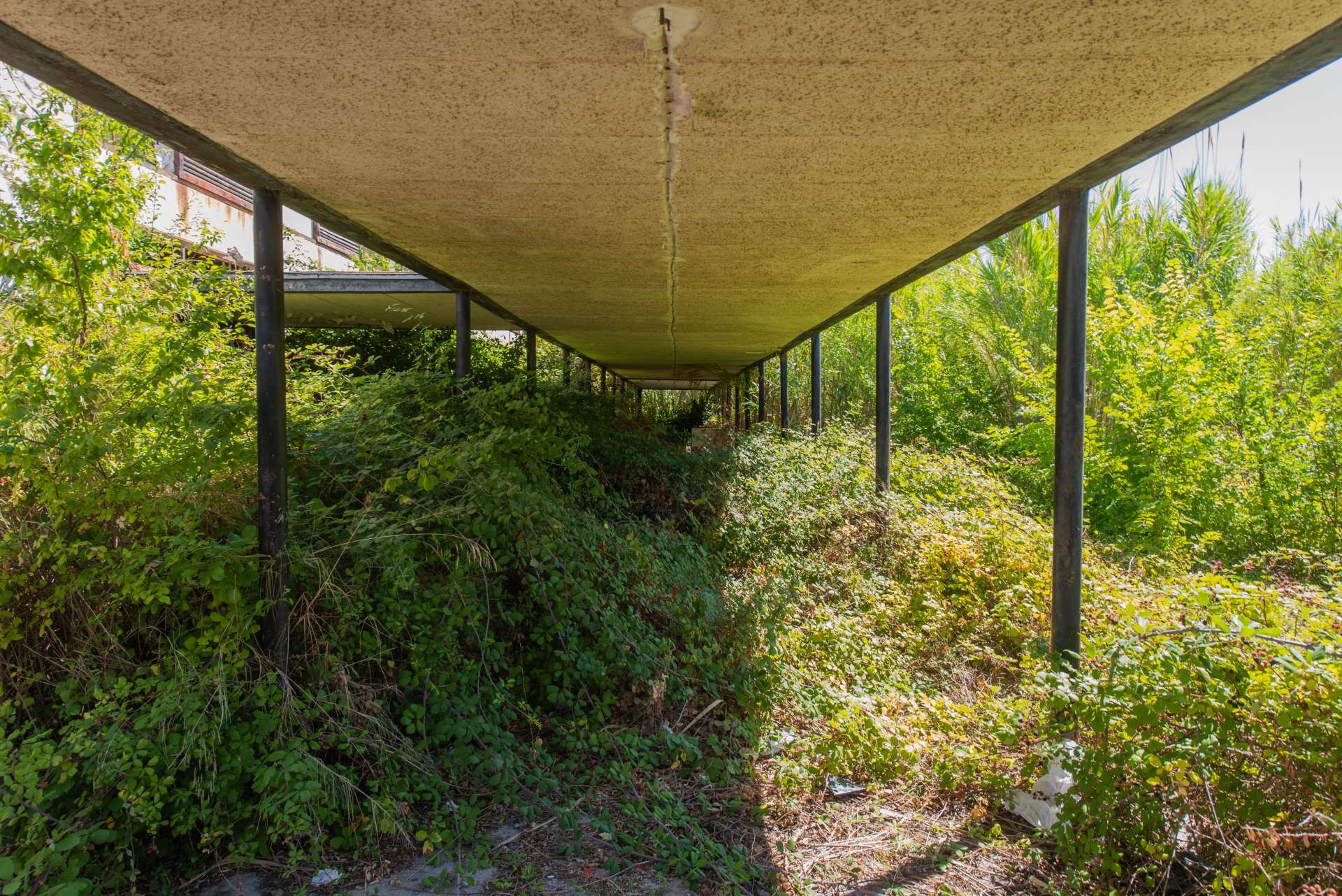 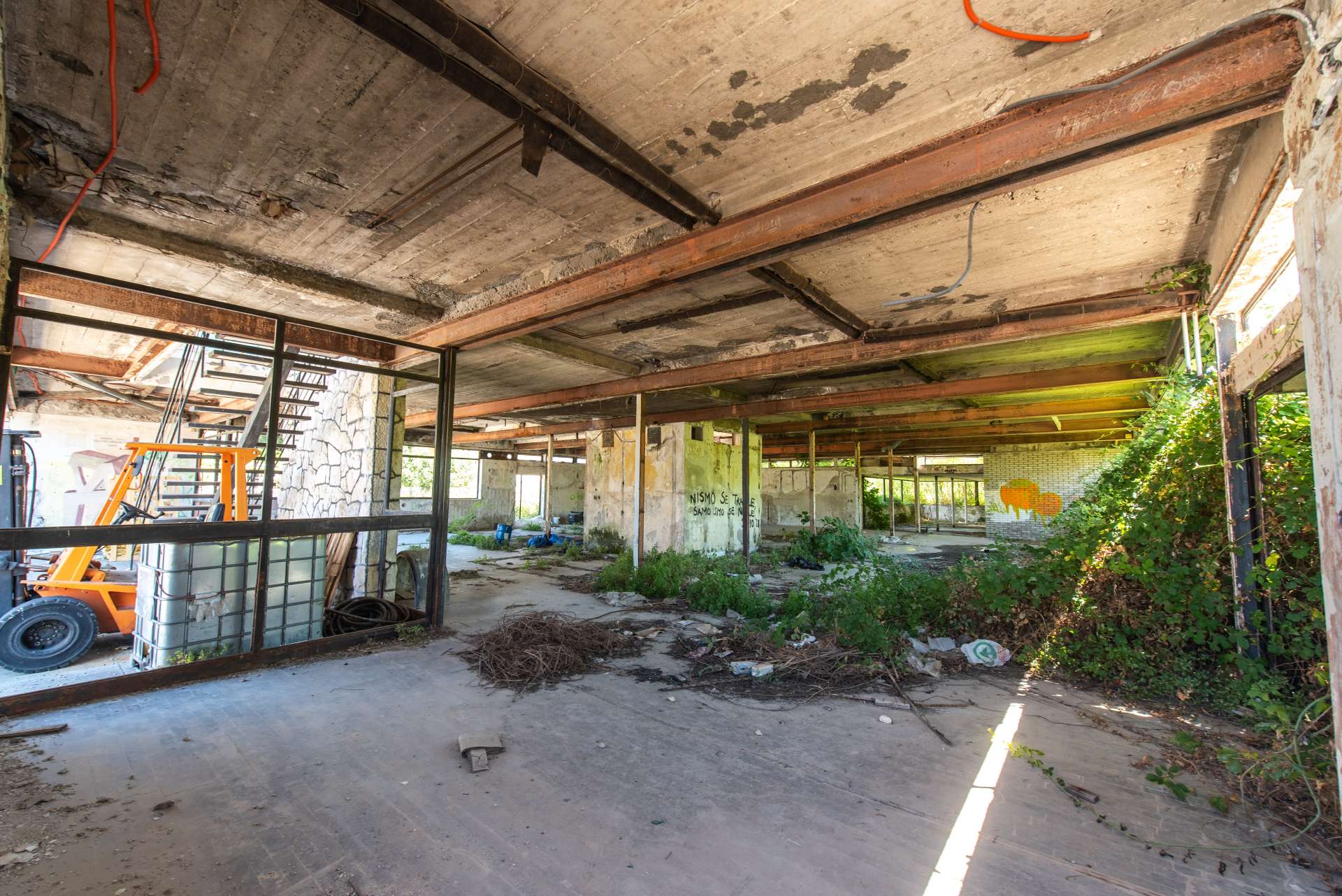 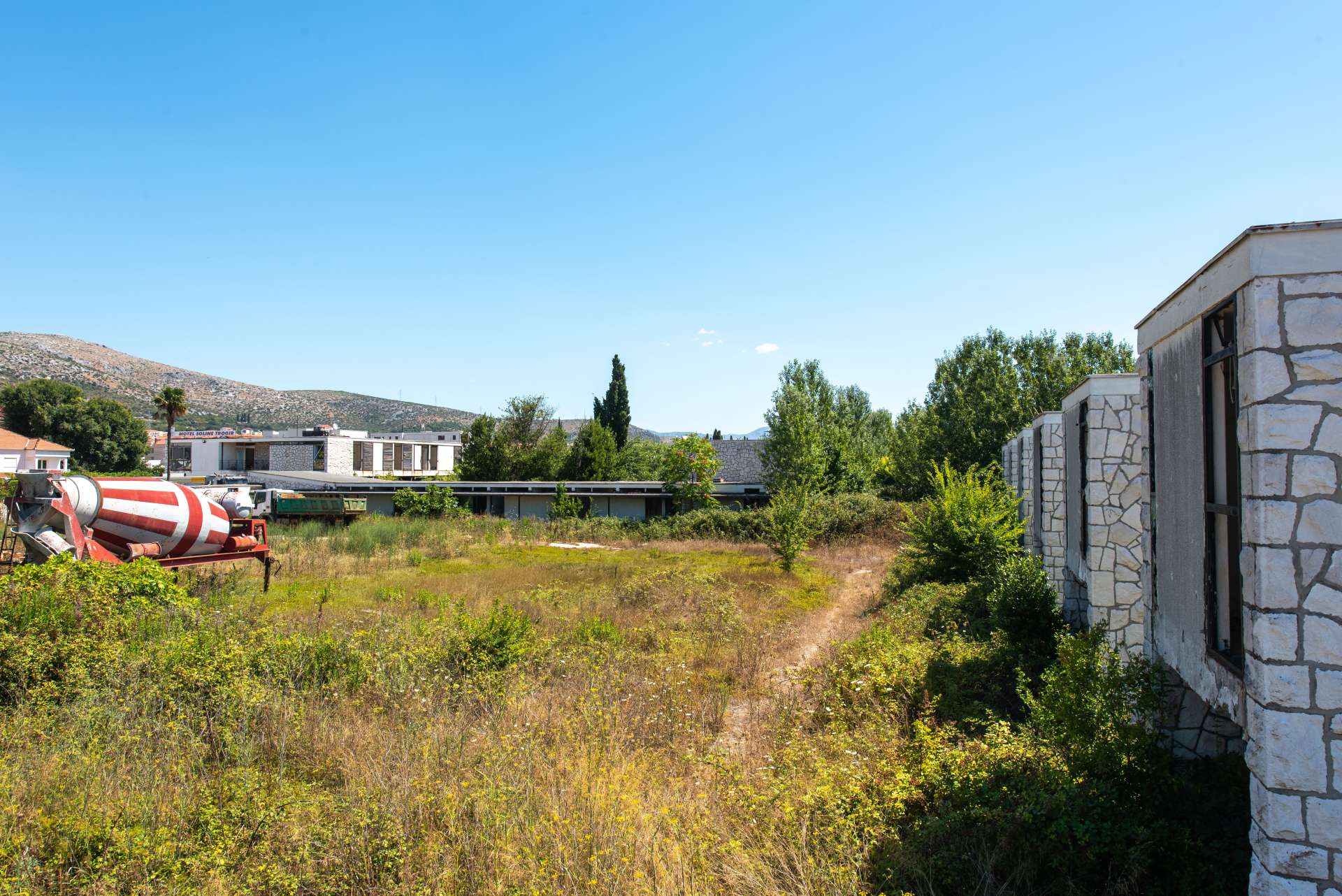 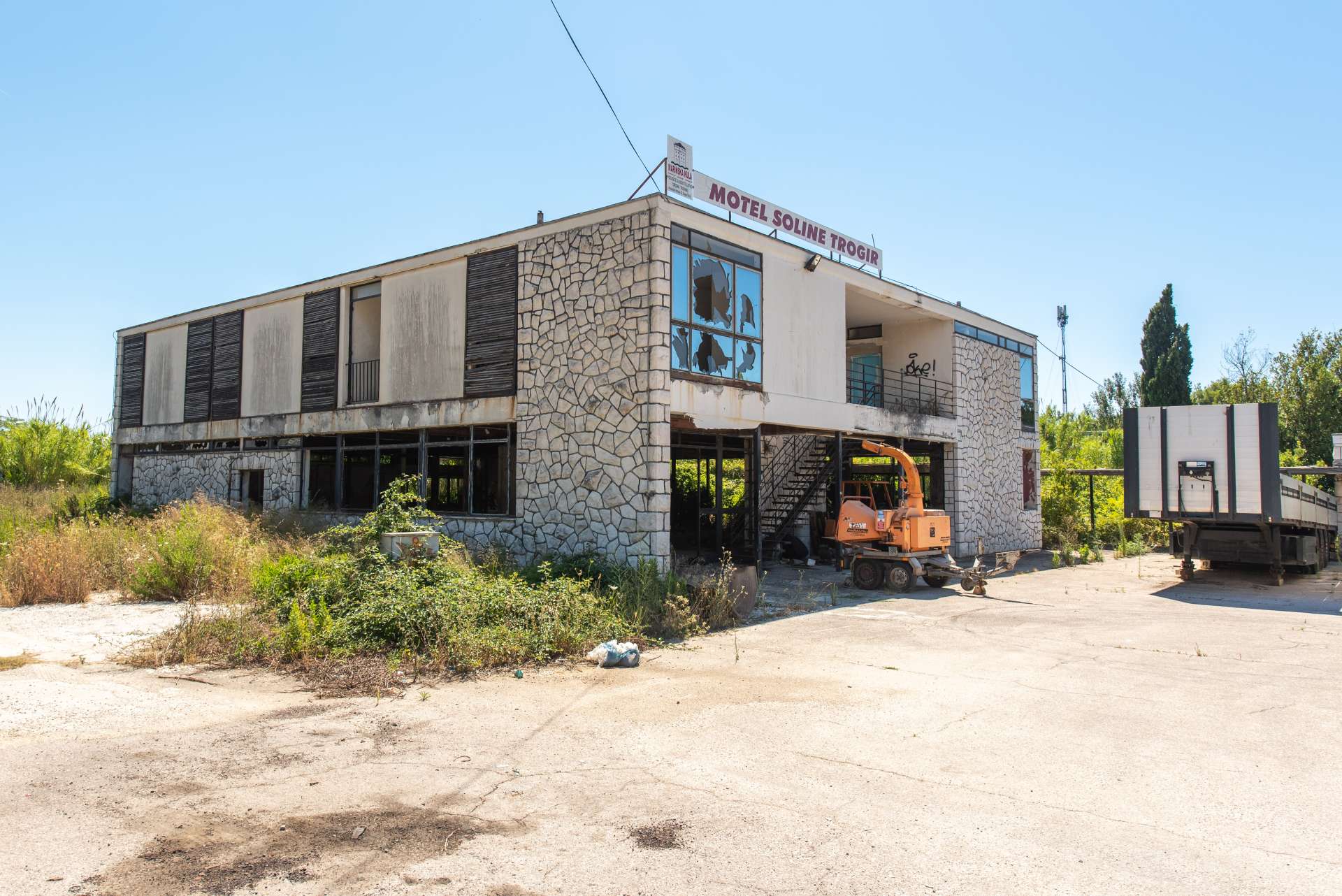 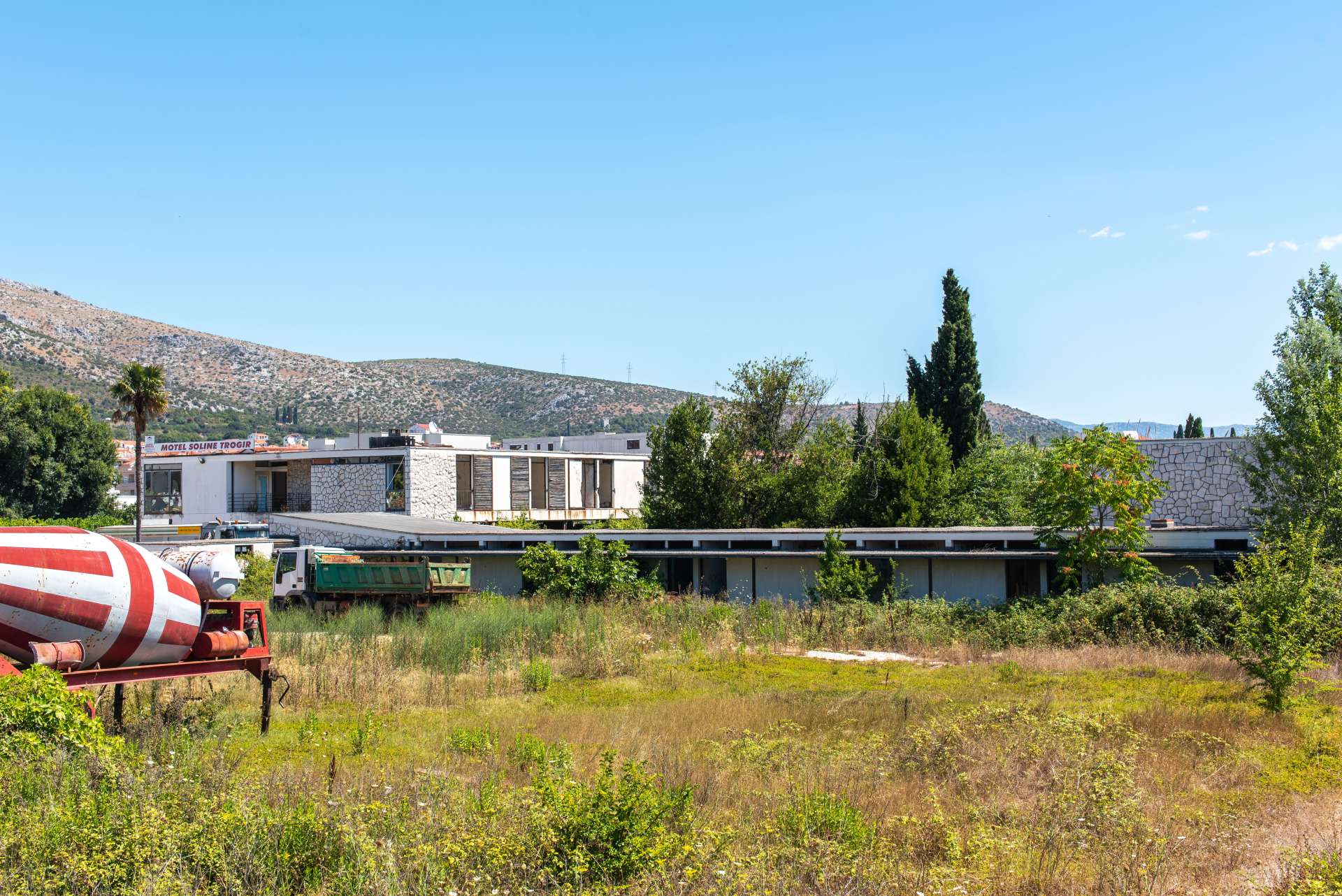 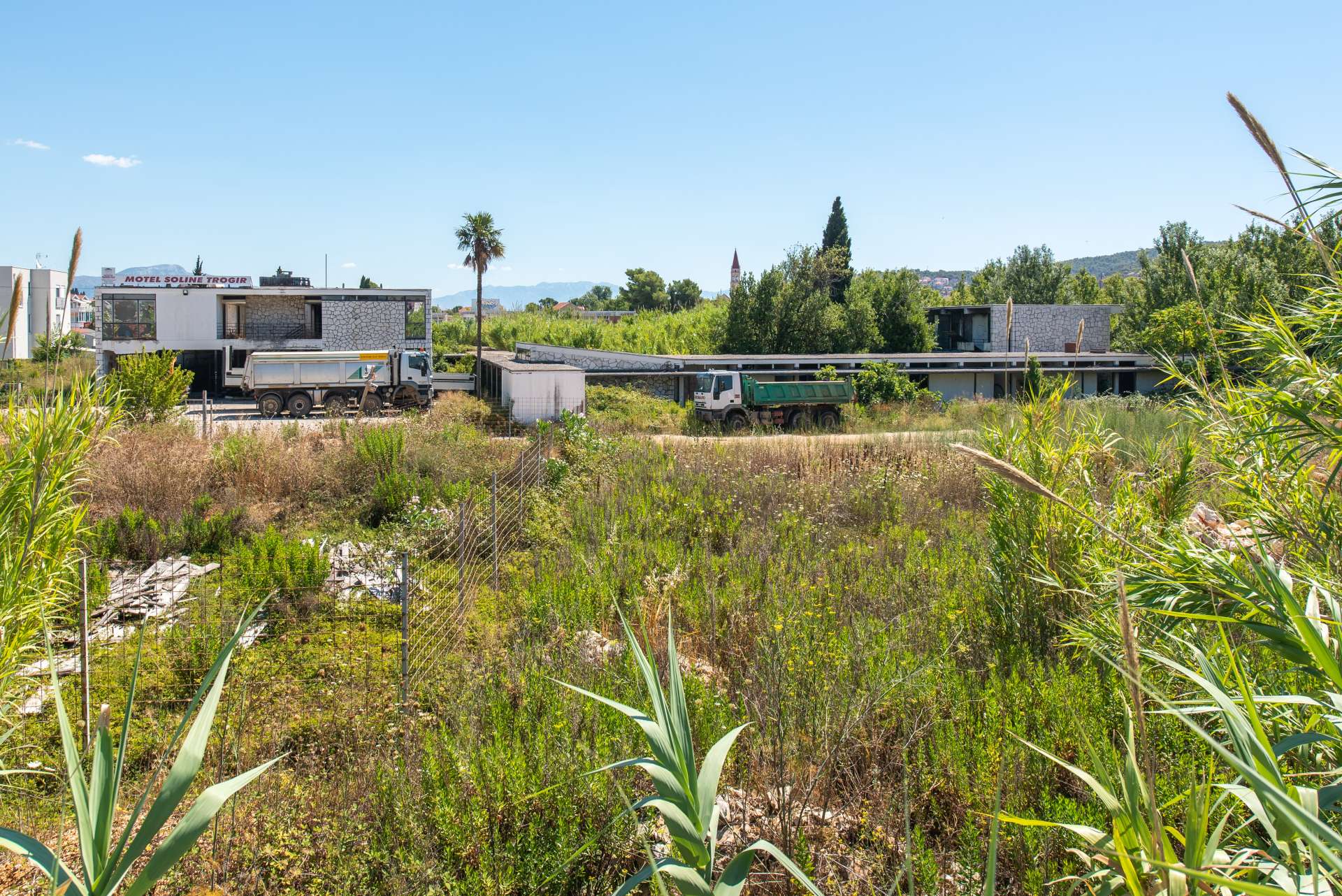